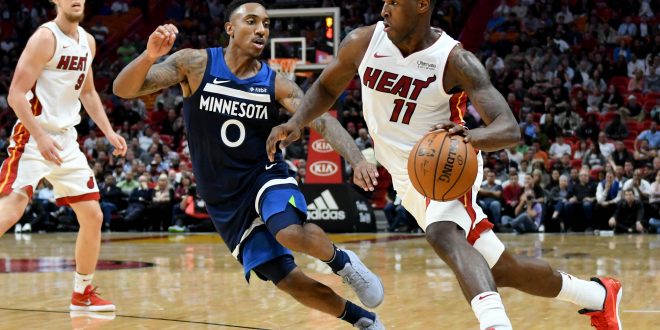 The NBA regular season is now a few weeks into motion and Florida teams are having different outcomes. On Monday night, the Miami Heat fell to the Timberwolves in overtime, 125-122. However, the Orlando Magic was able to lock in a win against the Pelicans 115-99. Here’s a quick look at what’s going on with these two teams.

Heat’s Rough Start to the Season

It is evident that the Heat are suffering without center, Hassan Whiteside, who has sat out for his fifth consecutive game due to a knee injury. Miami is now six games into the season with a record of 2-4 and sit at 13th in the Eastern Conference.  And while the Heat is stuggling to find its rhythm without one of its key players, some players have had their opportunity to shine.

Despite the result, an amazing night for Dion Waiters.

DW scored 21 of his game-high 33 in the final 5 minutes of the 4th quarter and OT pic.twitter.com/3CsshlmuSb

In 39 minutes of playing time, Waiters was able to supply 33 points, five rebounds, four assists, and three steals. Jumping from his rough 5 point game on Saturday, Waiters reminded everyone that he has the ability to be one of Miami’s top offensive options.

Up Next for the Heat:

Miami will host the Chicago Bulls tomorrow at 7:30 p.m.

In just seven games into the season, the Magic have shown their drive to win. With an overall record of 5-2, Orlando sits at second in the Eastern Conference. In their most recent matchup, the Magic trumped the Pelicans 115-99 last night.

The Magic came to New Orleans ready to win. With their solid bench play, strong defensive and lights-out shooting, they were able to shut out the Pelicans. Granted, the first half of the game was rough for Orlando. In the first half, they had absolutely no answer to All-Star forward Anthony Davis. But in the third quarter and on, the Magic brought their A-Game and did not allow the Pelicans any breathing room. Veteran forward, Marreese Speights exploded for the Magic, adding 18 points in his 22 minutes of game time as well as knocking down six of 10 3-pointers.

If Orlando keeps up this momentum, there is bright future ahead of them as the season continues.

Up next for Orlando, the Magic will be up in Memphis to match up against the Grizzlies. Game time is set for 8:00 p.m.