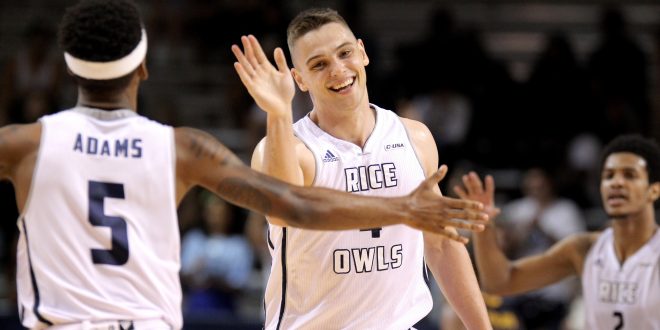 Gators Basketball: Koulechov Looking to Make A Big Impact For The Gators

Like Canyon Barry did last season, Egor Koulechov will be trying to make the most out of his one season at Florida.

Koulechov was one of the biggest additions to the Gators roster during the off-season. The 6-foot-5 forward is expected to fill the void left by Devin Robinson.

From Russia to Gainesville

Koulechov was born in Volgograd, Russia, but played high school basketball in Florida. He then went to Arizona State but transfered after one season. Egor would go on to play the next three seasons at Rice, becoming one of 16 players in Rice History to score 1,000 points and grabbing 500 rebounds.

Koulechov was recruited by Oklahoma for his last year of eligibility but ultimately chose to go back to where he played in high school.

Egor brings something to the table that most players do not–international experience. He competed for the Israeli national team in the summer of 2012 and 2013.

Looking At The Resume

When looking at Koulechov on paper, the biggest thing that stands out will be his experience. The graduate transfer played three seasons at Rice and also has competed internationally.

Last year was a big one for the Russian-Native as he started all 35 games for Rice and earned first team All-Conference USA honors. Koulechov can do anything Coach Mike White ask of him as he is an elite shooter and has a knack for getting rebounds.

He averaged 18 points and 10 rebounds per game. He was the only player in Conference-USA to average a double-double.

Coach White has says that Koulechov is improving everyday and that the biggest difference between him and Canyon is his leadership.

Playing at Florida in the SEC and playing at Rice in Conference USA is very different. Koulechov said that he’s needed some time to adjust and break free of some old habits.

One of the easiest adjustments for Koulechov so far has been building chemistry with his new teammates. Egor says that the guys have been great and have made the transition much easier.