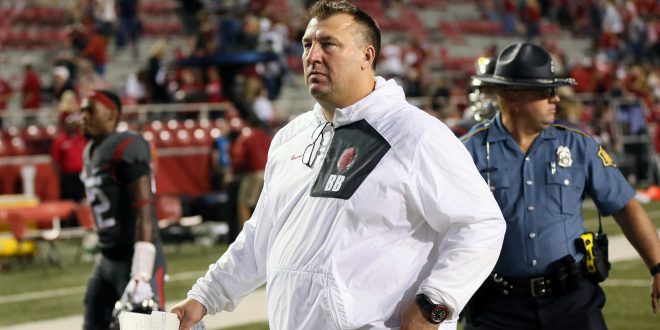 The Arkansas Razorbacks are back at home following an impressive 38-37 comeback win over the Ole Miss Rebels. Arkansas is now 3-5 overall and 1-4 in SEC play. This week, Arkansas head coach Bret Bielema says the team will look to build on its momentum as it takes on the Coastal Carolina Chanticleers.

In order to go bowling, Arkansas needs to win this game as well as two out of three against LSU, Mississippi State and Missouri. The offense has struggled a bit in the absence of senior quarterback Austin Allen, who suffered a shoulder injury on Oct. 7 in a game against South Carolina. Bielema says Allen has had no regression and is continuing to move forward.

Freshman quarterback Cole Kelley was named SEC freshman of the week and has shown promise at times, and it makes sense to not rush Allen back when the offensive line has been as woeful as it’s been. The Razorbacks have surrendered an SEC-worst 28 sacks this season.

Bielema says his team is playing together and each unit is feeding off of one another. The Razorbacks running back duo of David Williams and Devwah Whaley combined for 108 yards on the ground against Ole Miss. Arkansas will be hoping to see them have success against Coastal Carolina’s front seven on Saturday.

2017 is Coastal Carolina’s first season as an FBS football program. They began the new era with a win over the UMass Minutemen, but have since lost seven games in a row.

Senior quarterback Tyler Keane leads the team in passing with 1,327 yards. However, in two of the last three games, junior Kilton Anderson has seen game action as well.

Senior Oshamar Abercrombie is sure to get a good dosage of the workload at running back. He leads the team with 495 yards on the ground.

As a team, Coastal Carolina is ranked No. 103 in the county in total offense totaling 360.9 yards per game.

The matchup will take place at Razorback Stadium at 4 p.m. The game will be televised on SEC Network.

I'm an above-average golfer with surprisingly great touch around the greens. Click on my twitter link for some sports talk.
@Ry_McGinn
Previous Gators Volleyball Makes Statement in Sweep Over Kentucky
Next Santa Fe Saints Basketball Open With Dominant Win