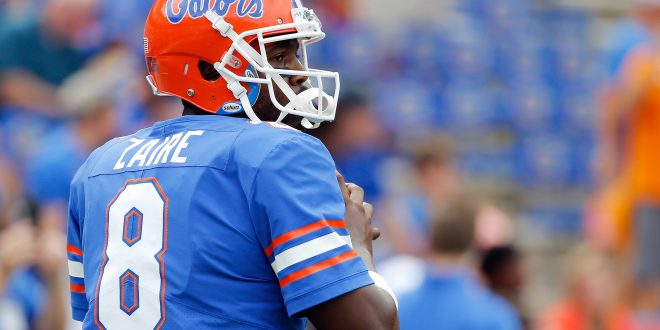 The last time the Florida Gators traveled to Columbia, Missouri, Will Grier was the starting quarterback and Jim McElwain was in his first season as head coach.

Now, both of them are gone. The head coach, for now, is Randy Shannon and Gator fans await what decision he makes regarding who starts at quarterback against Missouri.

The two contenders for the job are current starter Feleipe Franks and grad transfer Malik Zaire. Franks has the most starts this season, but Zaire is also an experienced quarterback who adds an element to the offense with his legs.

QB competition is back open for the #Gators. That could mean a third different starting QB this year – https://t.co/XBZ22Cv8kL pic.twitter.com/CHh06M5mOm

Getting the Guys Ready

Shannon said his guys have done a “tremendous” job of preparing for the game this weekend. The former defensive coordinator described the team as upbeat and positive. He said a way of managing a team in such a short period of time is trying to look at both sides of the football. He tries to stand at a point in practice where he can watch both sides.

“If (there’s) any mistakes I catch, I’ll tell those guys ‘Repeat it’ or ‘Hey, give me some answers on why we can do these certain things and why not,'” Shannon said.

First #Gators practice with music. Team warming up to Tom Petty’s “I Won’t Back Down” pic.twitter.com/UyHrDcyNwb

Shannon also said on Wednesday that wide receiver Tyrie Cleveland is back at 100 percent. Cleveland was bouncing around in practice, didn’t miss a rep and ran several deep routes.

He explained the importance of a player like Cleveland to the football team in the sound bite below.

Shannon said injuries can affect the Gators’ special teams. He acknowledged injuries on both sides of the football, but explained that college is not like the NFL. Teams and coaches have to run with the players they have, there is no getting news ones mid-season.

Don’t Sleep on the Tigers

Shannon also recognized how Missouri can be dangerous on both sides of the football in their own way. Shannon referenced Missouri’s great defensive end pair in Marcell Frazier and Terry Beckner. However, he said the Tigers’ veterans on offense could cause a problem for their young secondary.

As an interim head coach, Shannon’s first priority is the University of Florida and getting the players and coaches in tune with what they need to achieve.

“Every single day, you’re representing the University of Florida,” he said. “It’s why you play at Florida and it’s why you coach at Florida.”

Shannon will look to get this season back on track, and a win against this week’s noon matchup against Missouri is the first step.