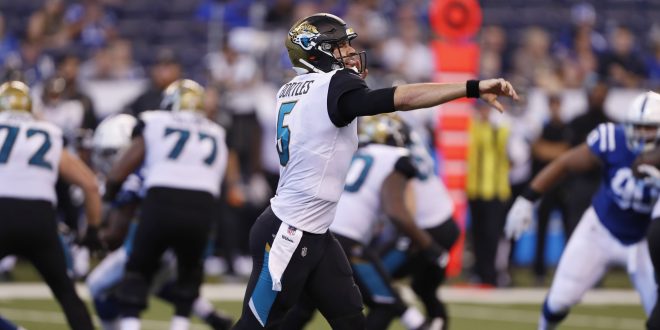 After a crazy trade deadline week, the Jacksonville Jaguars (4-3), with newly added defensive tackle Marcel Dareus to the squad, will take on the stacked lineup of the Cincinnati Bengals (3-4) this Sunday. However, the Jaguars have a chance to take over the AFC, but only if their defense shows up to play. On a per-game basis, the “Sacksonville”Jaguars are blowing other teams out of the water on defensive performance. The Jags have a leg up over the Bengals going into this game, so the question is: can the Bengals offense keep up?

Jaguar’s Ready to Be on Top

It’s not just the defense that will be a key to Sunday’s game against the Bengals. Rookie running back Leonard Fournette has rushed for 596 yards and scored at least one touchdown in each game he has played for the Jags. He is sixth in the NFL, even after missing last week’s big 27-0 win against the Colts. This allowed another player to emerge, quarterback Blake Bortles. Bortles hasn’t been playing too bad this season, but with Fournette on the bench last week, the Jags quarterback showed up and played strong against the Colts. Bortles threw for a season-high of 330 yards and had a 69.2% completion percentage, showing that he can lead the offense without one of their strongest players. With Fournette listed to play this weekend, the offense should be in top shape.

However, the defense is what the Bengals need to be worried about. The defense has been really good, but with the new addition of Marcel Dareus to the line up, the defense will be even better. The defense had a total of 10 sacks for that game, matching the single-game franchise record for sacks.

Bengals Looking to Bounce Back

Cincinnati won against the Colts last week, but it was too close for comfort. The 24-23 win makes it look like the Bengals aren’t ready to go up against the Jaguars this Sunday. The Bengals quarterback Andy Dalton was okay against the Colts, throwing 243 yards and had two touchdowns. However, the Bengals offense as a whole had a really had a hard time last week, with wide receiver A.J. Green catching 3 passes for 27 yards and running back Joe Mixon having only 18 yards on 11 carries. A big pick-six gave them a victory over the Colts, but the game was riddled with silly mistakes, such as two fumbles, that lead to the one-point win.

However, the defense of the Bengals isn’t too bad. They lead the NFL in red-zone defense and are 4th in pass defense, which is not far behind the Jags who come in at No. 1. Lineman Carlos Dunlap saved the Colts from defeat in the game last week, catching a pass from Colts quarterback Jacoby Brissett and running 16 yards for a touchdown. If Bortles slips up in Sunday’s game, it could be good news for this defense.

#Bengals lead the NFL in red-zone defense, allowing touchdowns on only 33.3 percent of opponent’s trips into the RZ.#CINvsJAX #Bengals50 pic.twitter.com/HI5Y8z6itM

Courtney Mims is a junior telecommunications major at the University of Florida. She enjoys covering all Gator sports and drinking gallons of Starbucks coffee while doing so.
Previous Preview: Will the Raiders or Dolphins win this weekend?
Next High School Football: Gainesville defeats Eastside 35-14 to close out the regular season