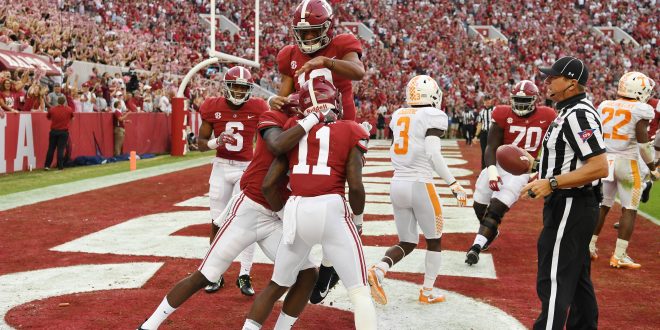 Preview: No. 19 LSU Faces No. 2 Alabama In Tuscaloosa

Share
Alabama Crimson Tide will be facing the LSU Tigers Saturday in Tuscaloosa, Alabama for what should be a good one between two ranked SEC teams. The official College Football Playoff Polls were released earlier this week. And while undefeated Alabama has been riding the number one slot the entire season, they were dethroned by undefeated Georgia. The Crimson Tide are ranked second and LSU who seems to be on a roll is ranked 19th. The Tigers record is 6-2 and 3-1 in conference and The Tide is 8-0 and 5-0 in conference.

LSU, early on had troubles when they got run over by Mississippi State and Nick Fitzgerald 37-7 and then got embarrassed at home by Troy 24-21. However, they then got some more confidence when they narrowly defeated the Florida Gators in the Swamp 17-16. Since then have gone on to win two more SEC games, against Auburn and Ole Miss. Many counted them out, going in to face top-ten ranked Auburn. Who has only loss came from the returning National Champions, Clemson.

In the weekly SEC Teleconference, head coach Ed Orgeron said how getting his Tigers in the right mind set has really helped pull off these wins.

An outstanding player that has really helped the Tigers is junior running back, Derrius Guice. Who averages 5.7 yards a carry and has 711 rushing yards so far this season. Orgeron mention in the interview how valuable of a player Guice is.

During the SEC teleconference, Nick Saban Head Coach of Alabama, even made mention of how hard it will be to defend Guice.

The Tide is Rollin’

The Crimson Tide has once again and by no surprised had an amazing season. However, this game against LSU looks to be their toughest game so far this season. While they started the season out against Florida State who was ranked 3rd; FSU has proven to not be as good as expected and now have a losing record of 2-5. This game however, should be a nice match up with LSU coming into the game off multiple SEC wins.

Nick Saban said, during the SEC Teleconference, that LSU brings a lot of challenges on Offense.

He also say’s that staying focus will be beneficial for Bama’s success in this game.

The game will be at Bryant-Denny Stadium in Tuscaloosa, Alabama. Kick-off is set for 8 P.M. on CBS. Earlier in the day, SEC Nation will be airing from the University of Alabama.