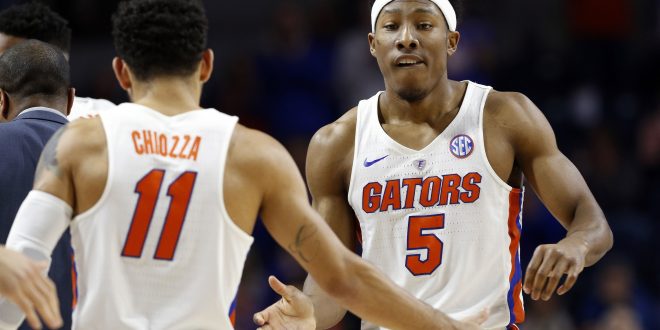 The Florida Gators have not had to worry about their point guard situation over the past half-decade. Former five-star recruit Kasey Hill and current senior Chris Chiozza have been a dynamic duo at the point for the Gators since the start of the 2014-15 season. All throughout the preseason, one of the biggest questions for this Gator squad has been who will run the point while Choizza is on the bench? Junior guard KeVaughn Allen, along with freshman Mike Okauru, will look to take the burden off of Chiozza.

However, with Chiozza spraining his shoulder during the Gators first exhibition game against Jacksonville, the lack of depth at point guard for Florida becomes even more of a pertinent issue.

Who Will Take Over?

The Gators, who are ranked eighth in the AP Top 25, only have three legitimate ball-handlers (Chiozza, Allen, and Okauru). Chiozza will look to play in the season opener against Gardner-Webb, but the team is uncertain if he’ll be able to suit up. With his status up in the air, Allen and Okauru must step up and run the show.

Allen, a junior combo-guard from Little Rock, Arkansas, led the Gators in scoring last year with 14.0 points per game. The high-volume scorer showed he can handle the pressure of top-tier competition after putting up a career-high 35 points against Wisconsin in the Sweet 16 last season. Allen will be forced to handle the ball a lot more this season.

Jalen Hudson praised Allen’s ability as a point guard, specifically his ability to create for others.

The former four-star recruit has no issue creating his own shot. He has always been an adequate passer, so the double-teams he’ll face this year will open up his teammates for uncontested looks.

Mike Okauru has an opportunity to get quality minutes as a freshman. The 6’3” combo guard has both offensive and defensive play-making ability.

Okauru knows he has to step up as a play-maker this season, especially with Chiozza on the shelf for the time being.

His elite athleticism is undeniable, which will only benefit the Gators going forward. The North Carolina product has the type of frame to put on some muscle over the next few years. He gets a lot of steals and is great in transition. Florida won’t ask him to do too much as a freshman, but expect him to get solid minutes for a team lacking backcourt depth.

Head coach Mike White applauded Okauru on how much he has grown since the start of the preseason. He then commended Allen for his effort defensively and urgency in transition.

The Gators showed they can manage without their court general after dismantling the University of Tampa by a score of 94-57. KeVaughn Allen finished with 11 points, four rebounds, four assists, and three turnovers in 23 minutes. Okauru produced 11 points on 5-6 shooting in 23 minutes, and had some acrobatic finishes around the rim. Neither played exceptional in the team’s final exhibition game, but they both showed they can control the offense without Chiozza.

The Gators are an extremely large team across the board, with seven of their 13 players above 6’8”. Frontcourt depth will never be an issue, especially when projected starting center John Egbunu comes back from his torn ACL. This size will undoubtedly frustrate teams and make up for the lack of court generals that the Gators have.

The real challenge will arrive when Florida starts playing some elite competition. Chiozza will be back by then, so that should make it easier on Allen and Okauru. If one of them gets hurt for an extended period of time, that’s where some major problems could arise. The Gators are fortunate that Chiozza’s injury is only a minor one.

If Allen and Chiozza can stay healthy for the season, we could be seeing the Gators in San Antonio in March.