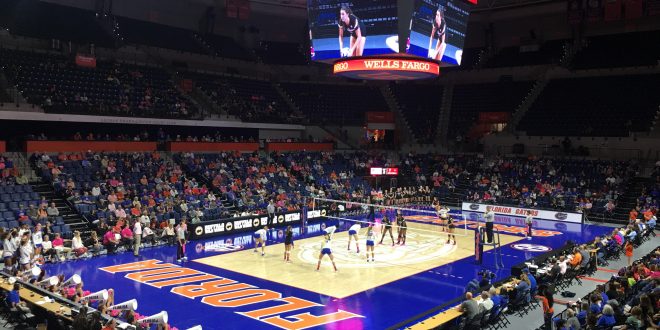 The story of the 2017 Gator volleyball season has been finding a way to win.

That was once again the case on Sunday afternoon as the fourth ranked Gators (20-1, 12-1 SEC) defeated Tennessee (11-11, 4-9 SEC) in three sets. Rachael Kramer led the way for Florida as she totaled 14 points and seven blocks.

Florida remains in first place in the SEC and have won six matches in a row.

What prevented Saturday from being an easy win for the Gators was lackluster play offensively. The Gators had a low .226 hitting percentage, a mark well below their .327 mark from Wednesday’s win over Kentucky. The Gators also committed too many errors in the serving department as they had 10 service errors.

Florida head coach Mary wise said that the offense struggled because of the lack of rhythm.

Even with the struggles, senior Carli Snyder was able to get the Gators points when they needed it the most. Snyder had a team high 15 points, 12 of which were kills.

Tennessee gave the Gators its best shot in the first set but Florida was able come out with a 25-23 win. That tough set win created the tone for the rest of the match. The Gators had a total of 13 blocks compared to Tennessee’s four.

Caroline ‘CK’ Knop has been one of the more reliable players this season and she showed that again Saturday. Knop had a team high 18 digs for the Gators, showing why she ranks 2nd in the SEC in digs per set (4.62).

After going undefeated on their three match road trip, the Gators return to Exactech Arena for two games. The first of which is Friday against Arkansas at 7 p.m. The match will be broadcast live on ESPN 98.1 FM, 850 AM WRUF and will be televised on SEC Network +.

#GatorsWWWWWin! Guaranteed to stay atop the SEC until next weekend! pic.twitter.com/w1UFrjtsOX