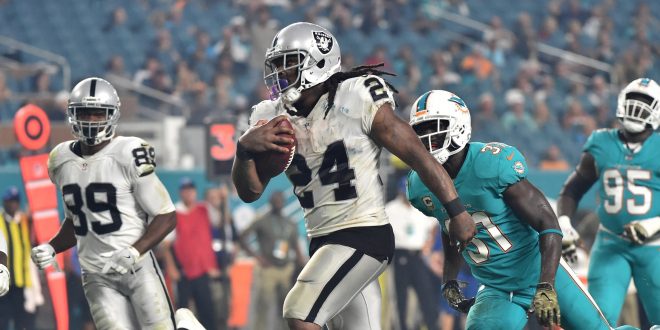 Dolphins and Raiders Battle in Miami

The Miami Dolphins hosted the Oakland Raiders in this week’s edition of Sunday Night Football. Derek Carr completed 21 of 30 passes for 300 yards and a touchdown as the Raiders defeated the Dolphins 27-24. Jared Cook led the Raiders in the air with eight receptions for 126 yards. Marshawn Lynch returned from his one game suspension and rushed for 57 yards and two touchdowns.

Jay Cutler returned after missing one week with cracked ribs and threw for 311 yards and three touchdowns. The former Chicago Bear completed his first 16 passes on the night.  Kenyan Drake paced the Dolphins with 69 yards on the ground and 35 yards in the air. Julius Thomas dismantled the Oakland secondary with six catches for 84 yards and a touchdown. Cutler kept everyone involved offensively, with five receivers catching five or more passes on the night.

The Dolphins couldn’t capitalize on Oakland’s mistakes. The Raiders fumbled twice on the same play, but the Dolphins weren’t able to put any points on the board on the following drive.

Miami also recovered an onside kick early in the second quarter, but were also unable to capitalize on the extra possession.

#Dolphins go for the onside kick early and recover it! pic.twitter.com/LzI8R1kOtw

Miami had a lot of trouble getting Oakland off the field in key situations. The Raiders converted 8 of 15 (53.3%) opportunities on third downs. Dolphins defensive tackle Ndomukong Suh noted that this was a big issue for the Miami defense.

Reshad Jones intercepted Derek Carr with 2:20 left in the game. The Dolphins were able to take advantage of this by scoring a touchdown less than 50 seconds later, but it was too late to make a legitimate difference in the outcome of the contest.

The Dolphins will be in the spotlight again next week as they take on the Carolina Panthers at Bank of America Stadium on Monday Night Football. They will look to keep pace in the highly-contested AFC East. The Raiders head into their bye week at 4-5. The following week they host Tom Brady and the 6-2 New England Patriots.