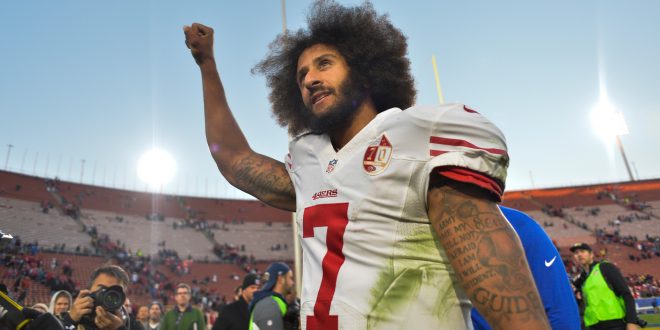 Highlights around the NFL from Week 9

In preparation for the Monday Night Football matchup between NFC North rivals Green Bay Packers and Detroit Lions, here are some highlights from Week 9 around the NFL:

The Falcons nearly completed a fourth-quarter comeback. Entering the quarter, the Falcons trailed 20-10. With just over 8 minutes left and the ball on the 39 yard line, Julio Jones found himself wide open behind the Panthers secondary. Matt Ryan spotted his receiver and threw him a pin-point pass in the end zone. To everyone’s disbelief, Jones dropped the ball.

The Falcons would get redemption with 3:25 remaining on the clock with a Tevin Coleman touchdown off of a screen pass.

Although the Falcons would get another chance with the ball, the Panthers defense forced a turnover on downs to seal a 20-17 victory.

The Ravens left it too little, too late to come back from 10 points down with under a minute remaining. With 46 seconds left in the fourth quarter, Flacco threw a 1-yard touchdown to Mike Wallace to make the score 23-20.

The Ravens then attempted an onside kick, but the ball didn’t travel far enough for a Ravens player to recover it. The Titans ran out the clock, and the game finished 23-20.

That's the final from Nashville. pic.twitter.com/QHAENKYpZ9

The Seahawks struggled to score for the entirety of the game until the fourth quarter. Twelve of their 14 points came in the last quarter of play, with two points coming from a safety in the first quarter.

The Seahawks, however, led the Redskins with about 1:20 remaining on the clock; then stepped up wide receiver Josh Doctson with a highlight reel of a grab.

Put it up and go get it.

Josh Doctson with the HUGE catch and the #Redskins take a late lead against the #Seahawks pic.twitter.com/mT12g2MTeO

Doctson’s catch set up Robert Kelley for his second rushing touchdown of the game to seal the game, 17-14.

Unlike the other games that finished close during Week 9, the Raiders and Dolphins were done scoring after three quarters of play. In a game with several eye-catching plays, the play of the game belonged to DeVante Parker with a ridiculous one-handed grab; one that was originally ruled incomplete, but later overturned.

Upon further review, it's a catch by @DeVanteParker11!

In the end, neither Parker’s wonder catch nor Cutler’s three touchdowns on 34-42 passing could save the Dolphins. Oakland’s offense were too difficult to stop, and the game ended 27-24.

The Houston Texans are reportedly interested in signing Colin Kaepernick. After losing Deshaun Watson to an ACL tear, the Texans only have Tom Savage to rely on for the quarterback position. Kaepernick would add more depth and more quality to the squad and would give Bill O’Brien more options for the offense.

Texans are not hiding behind the fact that they have discussed Kaepernick and Bill O’Brien is making that clear. So many factors involved.

Winston is set to miss the next few weeks after reaggravating a shoulder injury in Sunday’s game against the New Orleans Saints. Winston first suffered the injury, an AC joint sprain in his right shoulder, in Week 6 against the Arizona Cardinals.

The Vikings are going to have another option at quarterback this week. Teddy Bridgewater is set to return to the active squad after recovering from a serious knee injury that has kept him out of action since Jan. 10, 2016. The Vikings are likely going to stick with Case Keenum for now, as Bridgewater is going to need additional time to readjust back to playing in the NFL.

Next on Monday Night Football, the 3-4 Detroit Lions and the 4-3 Green Bay Packers face off in an NFC North rivalry game. The Packers are struggling to adjust to life without Rodgers at the helm. The game will kick off at 8:30 p.m. on ESPN.