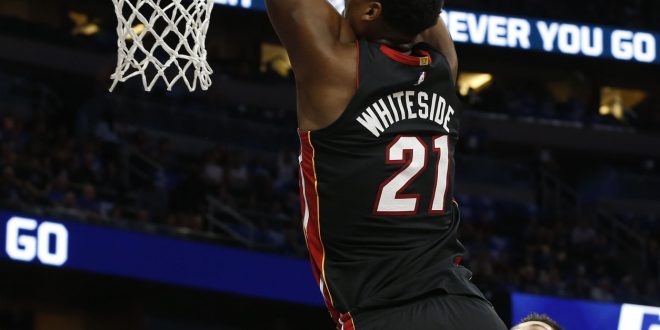 The Orlando Magic could not find their offense in a 104-88 loss to the Boston Celtics.  Meanwhile, the Miami Heat nearly squandered a 25-point lead to beat the Clippers in LA 104-101.

The Celtics jumped out to an 11-point halftime lead, and their stingy defense held the NBA’s best 3-point shooting team to 36.3% shooting from the floor and a paltry 20.7% from distance.    The Celtics combined for 10 steals and forced 13 turnovers as they consistently disrupted the flow of Orlando’s offense.

Jonathon Simmons struggled with early foul trouble, scoring 14 points in just 21 minutes.  Simmons started at point guard for the first time this year with both Elfrid Payton and D.J. Augustine on the pine with nagging injuries.  Evan Fournier, who has been on fire to start the season, mustered just 6 points on an abysmal 2 of 14 from the field.  Similarly, Terrance Ross dropped a 2 of 12 stat line including 0 for 4 from behind the arc.

The Celtics extended their win streak to 8 in the 104-88 win over the Magic.  Kyrie Irving and Al Horford have ignited the Celtic’s recent play, with key contributions off the bench from a deep Celtics’ lineup.  Marcus Smart and Terry Rozier sparked Boston’s play in the fourth quarter, hustling for loose balls and securing key rebounds to quickly push the lead to double-digits.

"We set the tone," Marcus Smart says of the second unit at the start of the fourth quarter. "We made them do what we wanted them to do."

Al Horford contributed his third double-double of the young season with 14 points to go along with 10 boards.  Jaylen Brown continues to show his progression in his second season in the league, leading the Celtics with 18 points.

That bucket belonged to Brown pic.twitter.com/y0ZPh5ndEc

The Celtics continue to boast strong defensive play as they have held their opponents to under 94 points in each of their past eight games.

The Heat played a well-rounded three quarters of basketball to stake a 25-point lead.  Then the team cooled off in the fourth as they were scoreless for the first 5:14 of the final period.

The Clippers stormed all the way back to take the lead, but James Johnson hit two key free throws late in regulation to help the Heat hang on for the 104-101 victory.

Hassan Whiteside recorded a double-double with 21 points and 17 rebounds on 9 of 16 shooting from the field.  Miami’s bench showed up strong, outscoring the Clippers’ bench 54-42.

A big afternoon in LA for @YoungWhiteside!

Starting guard Dion Waiters missed the game for the birth of his daughter – Dior Raina Waiters.  Waiters is expected to rejoin the team later this week as their six-game road trip continues.