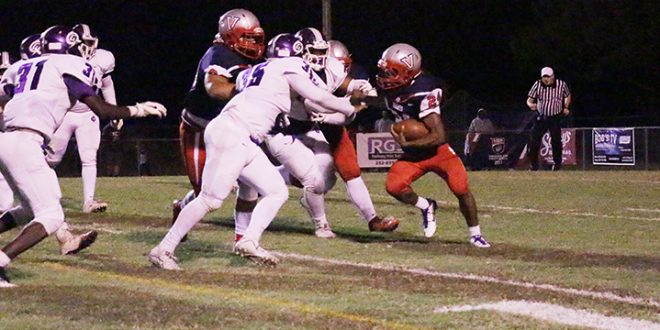 Vanguard running back Jaqueces Mathis approaches a group of Gainesville defenders with the ball. Photo by Roy Street.

Vanguard defeats Gainesville 34-14 in first round of 6A playoffs

The Vanguard Knights have yet to lose a game this year, having defeated the Gainesville Hurricanes by a score of 34-14 in the first round of the 6A Florida high school football playoffs.

Vanguard gets off to a fast start

Gainesville won the toss and deferred to the second half, giving Vanguard the ball. The Knights wasted no time with their opportunity. A 56-yard play by Vanguard receiver Debarre Jenkins eventually led to a 15-yard touchdown pass from Marquez Glover to receiver Trevonte Rucker. The PAT was good, making it 7-0 Vanguard. After some solid plays on defense, the Knights scored again when Glover completed a 52-yard touchdown pass to a wide-open Jenkins. With the PAT being good, the Knights led the Hurricanes 14-0.

The strength of the Vanguard football team all season has been its defense. In fact, the Knights did not allow any opponents to score on their home turf all season. However, that all changed when Gainesville quarterback Luke Matthews tossed a 27-yard touchdown pass to Taurean Hill. The PAT was good, making it 14-7 in favor of Vanguard. The Knights eventually answered back when BJ Crim picked up a five-yard touchdown run. The PAT was good, making it 21-7 Vanguard to end the first half.

Vanguard pulls ahead in the second half

What the coach said

After the game, Vanguard head coach Edwin Farmer talked his team’s win, Glover’s performance, and the team’s next opponent.

The Vanguard Knights will travel to New Port Richey, Florida on Friday, November 17 to take on the Mitchell Mustangs in the second round. That game will be at 7:30 p.m. Gainesville’s season comes to an end. 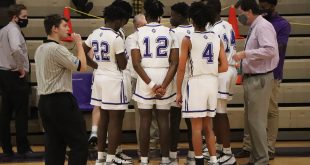