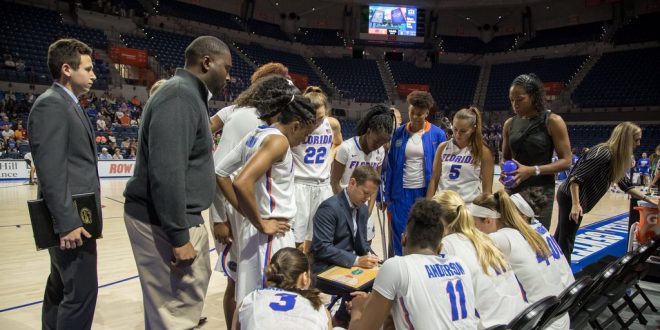 An exciting day of basketball turned scary in just a few minutes. Georgia State went on an 8-0 run to open Gators Head Coach Cam Newbauer’s debut. The Panthers tried to rain on the Gators’ parade and gave the Gators a fight. However, this version of Gator women’s basketball showed resiliency and fought through a tough start to the game. The Gators got the 2017-18 season off to a great start with a resilient 82-66 win over Georgia State.

With Saturday’s win, the Gators got the Cam Newbauer era off to a successful start. They were able to do so by first taking Georgia State’s best shot after they came out swinging early in the first quarter. This hot start became a test for the Gators. Coach Newbauer expressed his concerns about the team’s lack of resiliency before the game with his staff. With the Panthers giving the Gators their best shot, Coach Newbauer was proud of the way the Gators responded.

Senior Hayley Lorenzen shares her coach’s sentiments. The Gators were able to truly come alive after guard Funda Nakkasoglu converted a fast-break layup as time expired in the first quarter, tying the game at 20 apiece. Then the Gators went on a 15-2 run to end the first half and put them in the driver’s seat for the remainder of the game.

It’s no secret that Coach Newbauer loves the three-point shot. In his first game as Gator head coach, his Gators set a program record from beyond the arc. The Gators attempted a program high 31 three-pointers in their win over Georgia State. On paper, the Gators didn’t shoot lights out for the game. The Gators shot 10-31 (32.3%) from three in the win.

Even though the Gators didn’t shoot the percentage they wanted from three, Coach Newbauer will take those numbers. In her first game as a Gator, graduate transfer guard Paulina Hersler made a good first impression on the Gator faithful. Hersler shot 3-5 from beyond the arc and totaled a career-high 15 points. Hersler focused on the importance of the game rather than how she was going to perform the first time wearing the Orange and Blue.

Multiple Gators had a night that they won’t soon forget. Forward Hayley Lorenzen finished tied for the team lead with points with 18. She also secured her 850th career point with a trip to the foul line in the second quarter. This was the 40th time in Lorenzen’s career that she finished with double-digit points. Lorenzen also pulled down a career-high twelve boards to give her a fifth career double-double.

Lorenzen says she isn’t focused on personal accolades, she only cares about leaving a legacy of winning. Saturday was also a milestone night for Coach Newbauer, who got his first win as Gators coach. Newbauer got emotional when asked about what tonight meant to him. He says his players were able to get him through the game’s magnitude.

The Gators return to the O’Connell Center Tuesday night as they host Arkansas State with tip-off at 7 p.m.

Previous Vanguard defeats Gainesville 34-14 in first round of 6A playoffs
Next No. 8 Florida Gators Ready For Season Opener Vs. Gardner-Webb