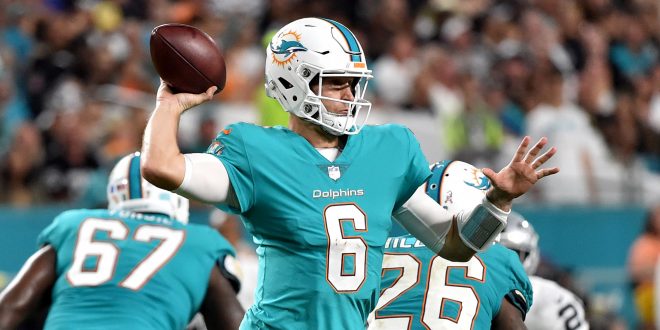 On Monday Night Football, the 6-3 Carolina Panthers are hosting the 4-4 Miami Dolphins in Charlotte.  The Panthers have won two straight, while the Dolphins have lost two consecutive games.

Battle of the defenses

Both offenses have not been as successful. The Panthers are 26th in total offense with 2818 yards, and the Dolphins are last with 2162 total yards. For perspective, the Patriots have 3685 total yards this season.

Panthers back on track

The Panthers have returned to winning ways after dropping two tough games against the Eagles at home and the Bears in Chicago. They’ve won away to the Buccaneers and at home against the Falcons, bringing their record to 6-3 after a 4-3 start.

The key for the Panthers on Monday is to contain Jay Cutler, the Dolphins’ starting quarterback. Although the Dolphins lost against the Raiders in Week 9, Jay Cutler had an inspired performance that almost won his team the game.

Granted, it’s difficult not to improve after losing 40-0 to the Ravens. With another loss last week against Oakland, many fans will desperately be hoping for a Dolphin win. If the Dolphins want to win this game, they need to put the ball in Jay Cutler’s hands and give him as much time as possible. Against the Raiders, Cutler threw for 311 yards on 34-42 passing, with three touchdowns and a passer rating of 121.3.

Creating offense has been the Dolphins’ biggest issue this season. With the confidence Cutler showed against the Raiders, the Dolphins may have finally found a way to score.

Ryan Kalil (C) remains on the sidelines as he continues to suffer from his neck injury.

Cam Newton talks about his dream of playing on Monday nights.