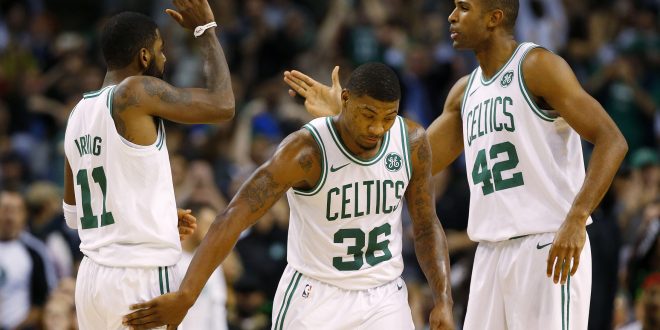 Five minutes into the Celtics season opener against the Cleveland Cavaliers, all-star forward Gordon Hayward went up for an alley-oop and gruesomely broken his ankle while landing. This sent a major shock wave throughout the NBA. Many celebrities, including LeBron James, Kobe Bryant, and Barack Obama, reached out to Hayward to offer their support during this difficult time. Boston had championship aspirations heading into the season after acquiring Hayward in free agency and trading for fellow all-star Kyrie Irving. After the injury, many thought the Celtics’ season was over. They started the season 0-2 after losing to Cleveland and Milwaukee, but have rattled off 12 straight victories to shock the rest of the league.

Brad Stevens is the Real MVP

The Celtics have played some tough opponents during this month-long stretch of winning. They have had the 12th toughest strength of schedule to date, so it’s not like they have been playing easy opponents. Six of the twelve games were against teams that are currently .500 or better. They also came back from two 18-point deficits in the same week (Oklahoma City and Charlotte), so the streak has not come easy.

Take a peek at the #Celtics 12 game win streak!

Which game was the best? pic.twitter.com/ihybvussan

Head coach Brad Stevens has continued to climb up the coaching ranks since he entered the league in 2013. He has improved his record every season, and has a knack for maximizing talent. Stevens turned Isaiah Thomas into a two-time all-star and MVP candidate last season. He turned Evan Turner into a legitimate contributor, who received a four year, $70 million contract with the Portland Trail Blazers. He transformed Jae Crowder from a bench player into a reliable three-and-D asset.

Stevens has received praise from numerous big names around the NBA, including coaching legend and future Hall-of-Famer, Gregg Popovich.

In a recent podcast with University of Connecticut’s women’s basketball coach, Geno Auriemma, Kyrie Irving stated that, “Brad fits perfectly in terms of that because he has an intellectual mind and is an intellectual human being. It was something I was unbelievably craving in terms of what I wanted for my career.”

Marcus Morris: "We have a lot of fight, tenacity is high, defense is high. We've been doing a great job on defense and Brad Stevens — he's a guru."

It’s evident that Stevens has gained the respect of the league. He was a primary reason why Al Horford and Gordon Hayward came to Boston as free agents in consecutive seasons. One of the things that Stevens preaches to his players is that every possession counts. In the NBA, one steal or one rebound could decide the outcome of the game. In Sunday’s game against Toronto, Terry Rozier’s big baskets at the end of the second and third quarter ultimately helped the Celtics win the game, 95-94.

Stevens is known for getting his players to buy into his system, which is indisputable for this year’s roster.

Boston has had the best defense in the league so far this season. They give up 94.0 points per game, which is 4.5 points better than the next best team. They allow 1.14 points per possession, which is also the best in the league. The Celtics have given up 100 points or more just twice in fourteen contests, and rank fourth in the league with 47.5 rebounds per game. They also rank second in point differential (8.2 points), first in team turnovers (13.1), and second in rebounding percentage (53.1%). Two of their major weaknesses last season, defense and rebounding, are the reason why the Celtics have the best record in the Association.

The Celtics head to Brooklyn to take on the Nets on Tuesday night. If they win in Brooklyn, they will head home with a 13-game winning streak to face the Golden State Warriors, who are currently riding their own six-game winning streak. Boston has clearly rebounded from the loss of Hayward, but it’s only fair to wonder how good this team would be with Hayward, and if they can sustain this unexpected early season success.