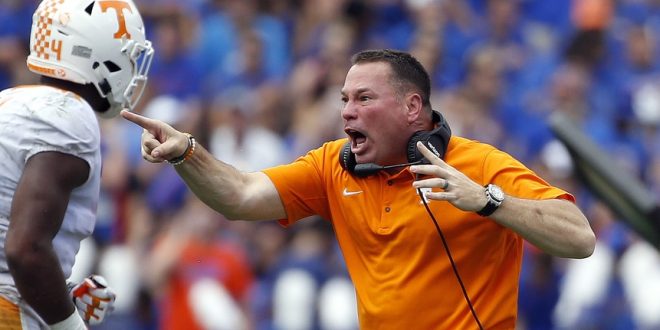 Tennessee fired head coach Butch Jones in the wake of an embarrassing 50-17 loss to Missouri. After back-to-back nine-win seasons in 2015 and 2016, the Volunteers success has regressed to 3-9 in their past 12 SEC games. Jones finished with a 34-27 career record as Tennessee’s head coach for five seasons.

Tennessee surrendered 433 rushing yards and 659 yards of total offense Saturday in a 50-17 drubbing at Missouri. The Volunteers added four turnovers in the disappointing performance.

Tennessee is a paltry 0-6 in SEC play with home games against LSU and Vanderbilt to close out the season.

Saturday’s loss compounded the frustration for Tennessee fans. The fate of Jones and Tennessee was on thin ice following the team’s 29-26 loss to Kentucky in the end of October. The embarrassing loss to Missouri marked the tipping point for a needed change of guard in Knoxville.

On behalf of @UTKnoxville,I would like to thank Butch Jones for his service and dedication to our @Vol_Football program. We wish Butch and his family all the best in the future…

Here’s Tennessee’s athletic director John Currie on the school’s decision to move on from Jones.

Defensive line coach Brady Hoke takes over as the interim head coach for the remaining two games of the season. Hoke has 12 years of experience as a head coach, most recently at Michigan from 2011-2014.

Four players decommitted from Tennessee Sunday following Butch Jones’ firing.  Among them was Under Armour All-American wide receiver Alontae Taylor who is ranked No. 46 in the Class of 2018.  Receiver Shocky Jacques-Louis, defensive back Tanner Ingle, and junior college defensive end Dorian Gerald also announced their decommitments from the Vols football program.

The recent turmoil around the program has significantly weakened the previously top 10-ranked recruiting class.

Jones upgraded the roster significantly with four straight top-15 recruiting classes nationally from 2014 to 2017. However, Tennessee wasn’t able to translate that recruiting success to the field, especially in big games. The Vols finished just 5-15 under Jones against Associated Press ranked opponents and 3-12 against Alabama, Florida and Georgia, their three biggest annual rivals.

Previous Jaguars Beat Chargers 20-17 in Overtime
Next SEC West Football: How the Teams Fare After Week 10