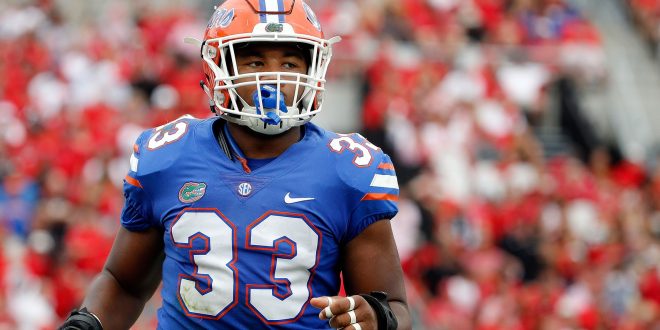 Gators David Reese Looking to Step Up as Defensive Leader

On a football team with a lot of star power, one is looking to step up. Florida Gators linebacker David Reese is hoping to become a leader for this football team.

Normally known for his quiet demeanor, he is looking to lead the team by example. Reese, who has 85 total tackles (40 solo tackles) so far on the season, wants to become a pillar for this team. Reese is also the first of many trying to be an example of leadership. Looking to follow the footsteps of Gators past, Reese feels that it is time for him to step up.

Wanting to emulate past Gator greats, such as Alex Anzalone and Vernon Hargreaves III, Reese says that him growing up “needed to be done.” He also says that the platform for leadership is there, thanks to the past players. The platform is one that he intends on using to aid the defense toward becoming “the best defense they can become.”

One of the biggest moments this season for Reese is in the game against the Tennessee Volunteers. In the first quarter of the September 16th face-off at home, Reese recorded an interception on quarterback Quinten Dormady. While Reese is making plays at defense, he is no stranger to the other side. Growing up with a head football coach father, Reese also played quarterback. That experience under center is what helps Reese in the leadership role. In fact, Reese actually credits that for taking on the leadership role for the Gator football team. Reese also believes that the time at quarterback helps in the leadership role being something “not new” to him.

David Reese and the Gators are back home this weekend with a showdown against the UAB Blazers on November 18th. This will be Florida’s first home game since a 19-17 loss to the Texas A&M Aggies on October 14th. The Gators are also looking to rebound from a 28-20 loss last week against the South Carolina Gamecocks, and improve to 4-6 on the season thus far. The game is set to kickoff at 4 p.m. on the SEC Network. Stick with ESPN Gainesville for more on Gator football as the season concludes.

Stephen Cabrera is a current University of Florida Journalism student and fan of football, basketball, mixed martial arts and professional wrestling.
@IAmStCa
Previous Gator Women’s Hoops Look To Correct First Game Mistakes As They Face Arkansas State
Next A Disappointing End for Gator Football Through the Eyes of Jawaan Taylor