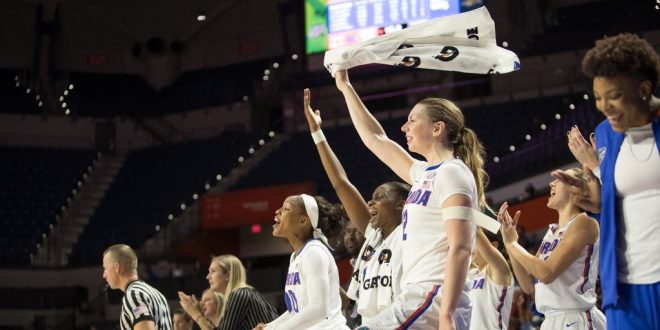 Even though the Florida women’s basketball team came up victorious over Georgia State on Saturday, the team still has room to grow. The Gators played with a resolve and resilience that made first year Gator head coach Cam Newbauer proud after Game One. Now, the team looks to put the emotional season opener behind them as they host Arkansas State Tuesday night.

The Gators welcome the Arkansas State Red Wolves to the O’Connell Center Tuesday night. The Red Wolves didn’t have a strong start to the season, losing 93-51 to Indiana. Even though the Red Wolves gave up a ton of points to Indiana, Newbauer knows that Arkansas State will bring the pressure on the defensive side.  In the win over Georgia State, the Gators struggled when the Panthers went to a full court press. The Gators know that teams will try to go that route to throw the Gators off rhythm. Coach Newbauer and the team addressed this in practice. Now, senior guard Dyandria Anderson feels confident that the team knows how to handle the situation.

Georgia State was able to deliver the first punch in Saturday’s game. The Gators got down early in the first before pulling away later in the game. Forward Paulina Hersler knows that a better start is in order when facing Arkansas State. Rebounding was a main reason for the Panther’s early success against the Gators. The Gators allowed 17 offensive rebounds. The Panthers even out-rebounded the Gators early on. Heading into tonight, attacking the glass has become a point of emphasis for the Gators. Coach Newbauer knows that rebounding must be a point of emphasis moving forward. Anderson knows for the offense to get out and run, they need to pull down boards.

Continue to Chuck It

As Coach Newbauer says, the Gators were “chucking it from the cheap seats” Saturday. They shot a program record 31 threes in the season opening win. The living and dying by the three ball is the style of play Coach Newbauer wants from his team. The Gators recorded a program record for three-point attempts. However, they were far from the record for makes. The Gators only converted 10 threes, which translates to 32.2 %. What hurt the Gators Saturday were unusual shooting nights from guards Funda Nakkasoglu and Sydney Morang. In her first game as a Gator, Nakkasoglu went 1-7 from beyond the arc. Morang also struggled, only shooting 1-4 from three. Coach Newbauer remains confident in his team knocking down the three ball.

The Gators look to correct the mistakes made in the opener and continue to improve as they take on Arkansas State Tuesday night. Tip off from the O’Connell Center is set for 7:00 p.m.