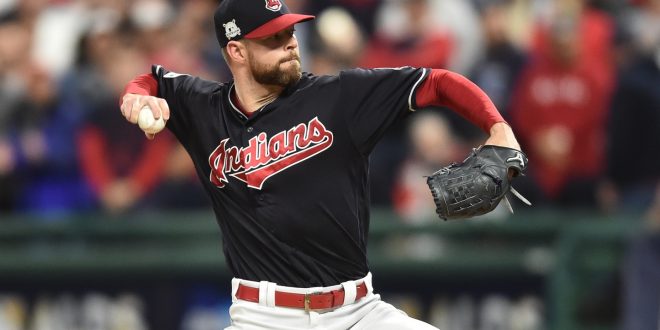 Around the MLB: Scherzer and Kluber Awarded Cy Young

Just after the Major League Baseball season comes to a close, it’s never long until it all starts gearing back up again. Before that time comes, the elite are praised for a job well done in each season.

The best hurlers in the league this season are Max Scherzer and Corey Kluber, winning the 2017 Cy Young Award. Two pitchers with two totally different styles at the mound, and another Cy Young award under each ones’ belt.

For Washington Nationals’ Max Scherzer, it was the third time his name has been called for the honor and the second year in a row. His dominance as the best of the National League was nearly unanimous, drawing 27 of 30 first-place votes by ballot members. Scherzer’s only the 10th pitcher with at least three Cy Youngs. Among that group, only two of them aren’t in the Hall of Fame: Clayton Kershaw and Roger Clemens.

Thirty-three year old Scherzer was 16-6 with a career-best 2.51 ERA this year. The righty struck out a league-leading 268 batters for the NL East and went for over 200 innings for the fifth straight season.

For the first time in club history, we have a two-time Cy Young Award winner.

Red Sox lefty Chris Sale finished second in the voting and Yankees righty Luis Severino finished third. Although Sale looked to be the best candidate for the award throughout the beginning of the season, Kluber excelled in the final stretch.

After getting off to a rocky start, Kluber missed a month on the disabled list. The injury may have slowed him, but he returned with a vengeance. Kluber was AL Pitcher of the Month in June, August and September. In that stretch, Kluber sported a 1.62 ERA and 224 strikeouts in 166.1 innings over his final 23 starts.

On the Agenda: Speeding Up the Game

In the MLB general managers meeting on Wednesday, one of the topics of conversation is speeding up the game.

Many regard baseball’s pace of play as slow and the average length is only increasing. These factors have come to the attention of those involved in the decision-making process. The average time of a nine-inning contest was a record 3 hours, 5 minutes this season. That average game time is up from 2:56 in 2015. Meanwhile, the postseason average was 3:29.

Some of the recommendations being discussed are limiting visits to the mound by catchers, fewer broadcast breaks between innings and a pitch clock. In the near future, catchers may only be allowed one walk out to the mound per pitcher inning. The possibility of a 20-second pitch clock is also being discussed. There have also been talks about shifting the strike zone by raising the bottom of the zone from just beneath the kneecap the top of the kneecap.

In order to see a change take place this upcoming season, there would have to be an agreement between the players and the umpire’s association by mid-January.

The proposed changes have come in response to feedback from fans and to help engage more viewers throughout the season.