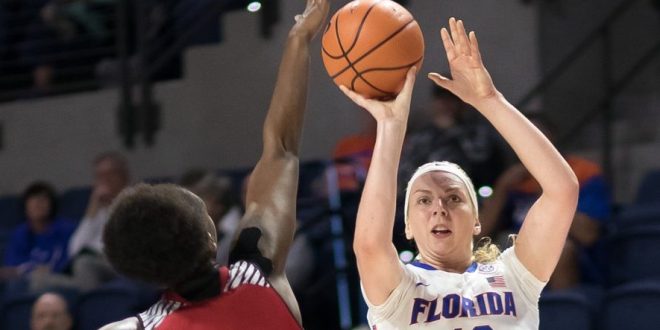 Tuesday’s loss to Arkansas State brought the Gator women’s basketball team back down to Earth. The loss humbled the team and got them focusing on properly correcting their mistakes. The Gators will be put to the test Friday night as they welcome in-state rival and 17th ranked Florida State.

Following Tuesday’s loss to the Red Wolves, Florida coach Cam Newbauer viewed the loss as an opportunity to really fix the team’s shortcomings. Heading into one of the biggest games of the season, that is what the Gators have done. The Gators have focused on fixing the errors that played major factors in Tuesday’s loss rather than looking at the rival Seminoles. Newbauer describes what the team has done in response to the upset loss heading into Florida State. A point of emphasis has been placed on communication in sharing the basketball. Junior guard Funda Nakkasoglu says that the turnover problem has been a mental struggle for the team.

The Gators were bullied by Arkansas State Tuesday night, especially in the paint. The Gators struggled to pull down offensive rebounds, only totaling 13 for the game. Physicality will be a major part in the Gators’ showdown with the rival Seminoles. Florida State plays a very physical style of basketball, that includes attacking the glass. The Seminoles have a rebounding margin of plus 23.5. Coach Newbauer knows that FSU will bring a physical style to Gainesville Friday. The Seminoles pose more of a challenge down low than the previous two Gator opponents as well.

The Seminoles, led by head coach Sue Semrau, boast one of the top players in the country. Senior forward Shakayla Thomas poses potential match up problems for the Gators. Through two games, she’s averaging 19.5 points and 7.5 rebounds. The 2017 Coaches’ ACC Player of the Year certainly caught the eye of the Gator players and coaches. Coach Newbauer says that Thomas is a player that the Gators will have to limit. Limiting Thomas for the Gators comes down to cutting down her looks at the hoop. Forward Paulina Hersler and the other Gator forwards will have a tough task defending Thomas. Hersler knows that preventing Thomas from establishing good shots will be crucial.

Friday will be the 73rd meeting between the Seminoles and the Gators. The Gators hold the edge in the series with a record of 42-31. Friday will be the first Florida-Florida State game for head coach Cam Newbauer and he says his focus leading up to this one has been on getting his team ready, and not on the opponent. However, Newbauer is excited for his first meeting with the rival Seminoles. For senior guard Dyandria Anderson, she knows exactly what to expect when the Gators and Seminoles go toe-to-toe. Anderson’s best advice to the rest of the team heading into Friday is to take advantage of the big game spotlight.

The Sunshine Showdown between the Gators and Seminoles will take place Friday night. Tip-off from the O’Connell Center is set for 7 p.m.