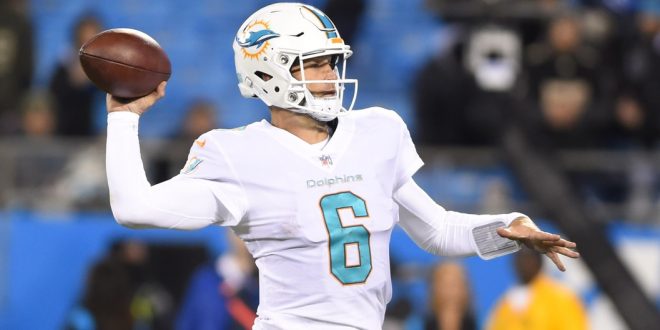 It’s Week 11 for the NFL and this week the Tampa Bay Buccaneers and the Miami Dolphins will battle it out at the Hard Rock Stadium. The two teams were orginally sceduled to play against each other in September. However, the game was rescheduled to this week due to Hurricane Irma.

Why This Game is Important for Miami

The Dolphins have prepared a lot for this weekend’s game. Miami has lost the last three consecutive games and it is critical that they defeat Tampa Bay on Sunday. As of right now, the Dolphins are in a tight spot: Miami is third in the AFC East with an overall record of 4-and-5. With Tampa Bay’s record at 3-and-6, if the Dolphins cannot secure a win at home, the rest of the season looks bleak.

After this weekend’s matchup, the Dolphins will have to travel up the New England to face the 7-2 No. 1 AFC East, Patriots. Miami has lost the last eight consecutive games away against the Pats and coming into the match-up having previously lost to the Bucs makes them severe underdogs.

Now, a victory on Sunday does not necessarily mean success for the Fins. However, it does allow them to have another chance. With the upcoming games for Miami, it is necessary for a win this weekend to at least keep the morale up for teammates and fans.

So what can Miami do to secure a victory?

Work on their defense.

While the defense was able to secure Miami a solid start of the season 4-2 , they have since then allowed 40 points or more than two in their past three meetings, according to reports. Defensive Coordinator, Matt Burke, says that he has been working with the defense to fix the problem at hand.

Fans will find out on Sunday if Miami is able to pull-off a win.

Tampa Bay Fresh Off a Win

In Week 10, Tampa Bay was able to break their five-game losing streak as they defeated the Jets 15-10. As the Bucs were starting to gain a lot of yards through the air, the loss of QB Jameis Winston has been a struggle for the team. QB Ryan Fitzpatrick will continue to fill-in for Winston this week. Last week, Fitzpatrick threw an ugly pick against the Jets but regardless he was able to help the Bucs survive at home. As Tampa Bay prepares for their meet up agains the Dolphins, Fitzpatrick knows what his teammates and himself need to do.

However, Fitzpatrick is not the player the Dolphins need to worry about the most. WR Mike Evans will definitely be their biggest threat on the field. After coming off a one-game suspension, Evans is hungry for a win. The Wide Reciever has has three consecutive 1,000 yard seasons since his draft in 2014. Tampa Bay has stuggled this season in excuting running plays, so their best bet is to keep the ball in the air.

Tampa Bay is currently fourth in the NFC South with a record of 3-6. They want this win just as much, if not more than Miami.

Dolphins will host the Buccaneers at 1 p.m. on Sunday. You can watch the game on FOX.