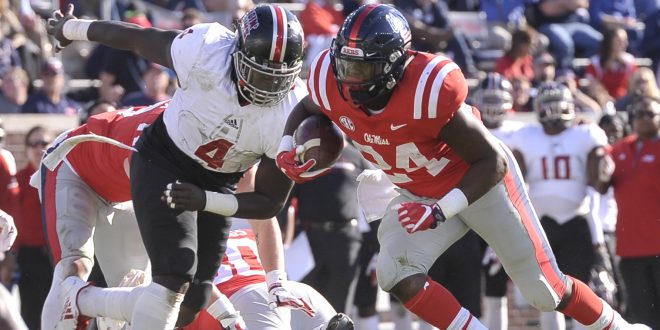 CFB Preview: Will the Rebels win final home game against the Aggies?

The Ole Miss Rebels and the Texas A&M Aggies will play in college football in Oxford; both teams are coming from wins last week, but this match up is going to be hard to predict because both teams are having some issues.

The Rebels will be in Red for senior night at The Vaught.#RebThreads #HottyToddy pic.twitter.com/u8ufS5b83e

This season has been one of transition for the Rebels as well. Ole Miss has been searching for a new head coach since early July. Interim coach Matt Luke spoke earlier this week on how coaches are aware that the job is heavily reliant on results and it can make or break some careers. Coach Luke has been with the Rebel coaching staff for 10 seasons and he could be a candidate for the full time position.  On top of changing on the coaching staff, the team has had to switch up quarterbacks as well.   They lost their five star recruit, Shea Patterson, to a knee injury earlier this season. Jordan Ta’amu has been the starting quarterback since Patterson’s injury and Luke has been very impressed with the job he has done.

In last week’s game against the University of Louisiana’s Ragin’ Cajuns the Rebels walked away with a 50-22 win.

Last week in the game against 4-7 the University of New Mexico the Aggies were up 48-7 by halftime. This season the Aggies have cycled through their quarterbacks due to injuries, but in the first half freshman Nick Starkle threw a career-high of 419 yards and four touchdowns.

The game was the 50th win the Aggies have had with Kevin Sumlin as coach. Although they looked great offensively and walked away with a 55-7 win, some are still not happy with the job Sumlin has done and there are rumors he could be let go at the end of the season.

Both teams have good offenses so it could be a high scoring game.  Both of these teams have proved they have the ability to throw the ball down the field and rack up points. Neither have relied much on running the ball or using power to gain yards but their passing games are a great threat to each other. This game is especially important for the Rebels as it’s their final home game of the season and their Senior Night.

You can watch the game on ESPN2 at 7 pm.