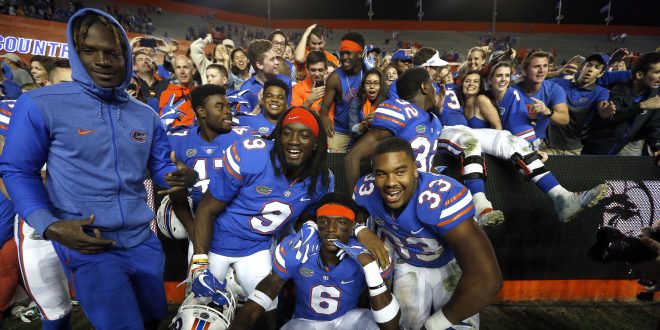 In a roller coaster season of emotions and unexpected events, the Florida Gator football team pulled out a much need win tonight. The Gators cruised to a 36-7 win over the UAB Blazers. Tonight’s win is the fourth of the season for the Gators; the team’s last win came nearly two months ago, on September 30th against Vanderbilt.

Like many other games, the Gators offense got off to a slow start. The team failed to score a touchdown despite getting right outside the red zone on their first possession of the game. However, Eddy Pineiro was able to connect on the 39 yard field goal to put his team on the board and take the 3-0 lead.

Fortunately for the Gators their defense took a strong stand and only allowed two first downs for the half. The defensive dominance allowed more opportunities for the team’s struggling offense to take the field. However, dropped passes and some errant throws seemed to be the theme to start the game and carried over into the second quarter.

The Gators did not score their first touchdown until the second quarter after Chauncey Gardner took things into his own hands with an interception. He was able to put his team in the red zone with a return down to the Blazer 13.  Two plays later, quarterback Feleipe Franks would find C’yontai Lewis on an 11 yard pass that he took into the end zone for the first touchdown of the game.

Franks finished the first half with 10 completions on 21 attempts for 101 yards and one touchdown.  The Gators went into the locker room up 19-0.

The team had another slow start when they took the field to begin the second half. On their first possession they accumulated negative yards on just two plays. Later on, at the 8:50 mark, the offense got momentum.  Fueled behind a 17 yard run by Mark Thompson followed by another 16 yard run for two back-to-back first downs, the Gators built on the energy. Franks found DeAndre Goolsby for a 13 yard touchdown to put the team up 26-0.

In UAB’s next possession, the Gator defense proved to be too much once again. Rayshad Jackson forced a fumble which was recovered by Shawn Davis on the Gator 22 yard line. The Gator offense took advantage of the fumble in their next possession. LaMical Perine scurried into the end zone on a 15 yard run to end the third quarter in style.

The Gators’ two touchdowns in the third quarter were the most they had in one quarter for the game.  However, the team looked to be a little content with the score coming into the fourth quarter.  On UAB’s first play, quarterback A.J Erderly threw a bomb down field to Xavier Obosi to complete a 74 yard pass for a touchdown. The throw by Erderly was the longest scoring play of the season for UAB. The Blazers were unable to find the end zone for the remainder of the game and the Gators would go on to win 36-7.

Florida interim coach Randy Shannon said he is happy with his team’s fight throughout the game.  He said going into this game the defense emphasized getting sacks and forcing turnovers. Shannon said he was very pleased with the carry over from practice.

It was a standout night for Eddy Pineiro, who finished with five made field goals setting a career high. Two of Pineiro’s kicks were for 50 or more yards. He became the first kicker in school history to kick two 50 yard plus field goals in a single game.  After the game he said he felt good and he was just doing his job.  He said his main goal is be consistent. Pineiro has not missed an extra point  since Florida’s loss to Michigan in the season opener. Surprisingly, he said missing that kick was one of the biggest blessings in his life.

After the game, Shannon said a handful of players were banged up. They include:

Shannon said after the players get evaluated tomorrow by team doctors they will know the extent, if any, of the injuries from tonight.

Heading into next week the team will look to recover and build on tonight’s win, before taking on in state rival Florida State next week.

@Bree_Max03
Previous CFB Preview: Will the Rebels win final home game against the Aggies?
Next Florida Ready For Third Game In Seven Days vs. New Hampshire