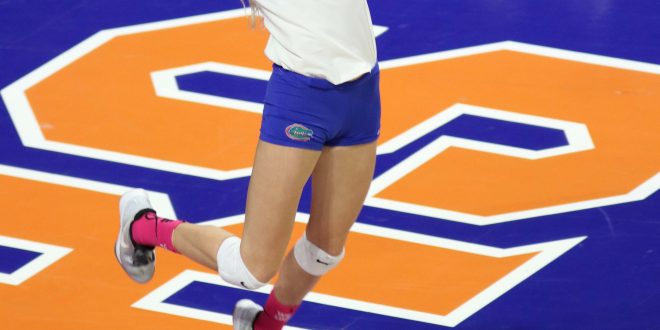 It has been a record-breaking season for coach Mary Wise and the Gator squad. Florida has now won 14 matches at home, the first time that has happened since 2013.  As they look to finish the regular season strong and continue their play into the postseason, the team will lean on players who have taken star roles both offensively and defensively.

The Gators are only one of four teams (Kentucky, San Diego, Wisconsin) in the country with two players ranked inside the top 20 nationally in hitting percentage. These two players are middle hitters Rachael Kramer (9th .424) and Rhamat Alhassan (18th, .401)who was recently named SEC Player of the Year.  Making good decisions will be a focal point as the Gators enter tournament play.  Gator coach Mary Wise was also named co-SEC Coach of the Year as she led her team to a terrific regular season showing.

Defense wins championships and Florida has a defense that can win them one. While their offense is dangerous, their defense has come through in big moments. Florida has held teams to a .125 hitting percentage, least in the country. Players like Rhamat Alhassan, who leads the country in blocks per set with 1.80, are a big reason why. Gators will also look to stay hot with their backline defense led by libero Caroline Knop.

A Look at the Opponent

Auburn fought hard, taking a set in the match but the Gators were too much in the end.