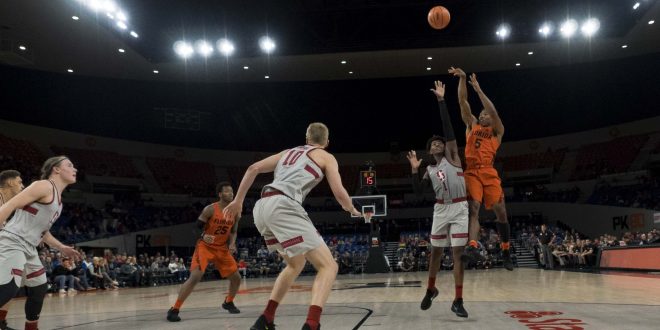 No. 7 Florida Demolishes Stanford in 108-87 Victory

Offense was abundant in the Gators’ 108-87 victory over the Stanford Cardinal on Friday night at Veterans Memorial Coliseum. Florida’s 108 points were the most scored vs. a Power5 opponent in the NCAA this season. Egor Koulechov led UF with 26 points, shooting 10-14 from the field and 5-5 from three-point range.

Four other Gators finished in double-digit scoring as well. Jalen Hudson scored 17 points, Michael Okauru posted a career-high 15 points, Deaundrae Ballard added 13 points and Chris Chiozza scored 14 points. Florida set a new program-high for three-pointers made in the first half of a game, sinking 13 vs. Stanford.

Chris Chiozza recorded his first double-double of the season, finishing with 14 points, a career-high 11 assists and 4 steals. The Gators shot 58% from the field and 68% from the beyond the arc, while adding 32 points off of 18 turnovers. Florida hit the century mark in points for the third time in just four games. Reid Travis led Stanford with 23 points on 6-12 shooting, but the team struggled as a whole.

Florida jumped to a 16-5 lead after the first three and a half minutes of play. Egor Koulechov knocked down his first two three-point attempts, while the Gators nailed four of their first five shots from long-range.

Jalen Hudson and Egor Koulechov combined for 18 of Florida’s first 22 points. Hudson’s four-point play gave the Gators a 22-9 lead with 14:58 remaining in the first half.

A 20-6 run gave Florida a 42-23 lead with 7:08 remaining in the first frame. The Gators hit 9 of their first 12 three-pointers and scored 13 of their first 42 points in transition off of turnovers.

Florida took their first 20-point lead of the game on an Egor Koulechov three-pointer. The Gators continued their three-point rampage, sinking 12 of their first 16 attempts from long-range. With three minutes left in the contest, five different Gator players had hit a three-pointer, as Florida led Stanford 51-31.

The Gators took a 58-39 lead into halftime, sinking a program-record 13 first half three-pointers. Egor Koulechov and Jalen Hudson led Florida after the first 20 minutes with 17 points apiece, while Chris Chiozza added 9 points and 3 steals. Reid Travis was Stanford’s only double-digit scorer in the first half, scoring 12 points on 4-9 shooting.

Florida averaged 1.526 points per possession in the first frame and sank 63% of their shots. The Gators forced 9 turnovers in the first half, leading to 18 points. Chris Chiozza led the team with 8 first-half assists, as the team totaled 14 dimes.

The Gators took their first 30-point lead of the game with 10:54 left on a pair of Chase Johnson free throws. Up to that point in the game, every Florida player to touch the floor besides Gorjok Gak had scored at least 2 points.

At the under-4 minute media timeout, the Gators led 105-69, eclipsing the century mark in scoring for the third time this season.

The Gators will take on the winner of Gonzaga/Ohio State on Friday night at 11 p.m. in Portland.

So much Clubber Lang in Florida….