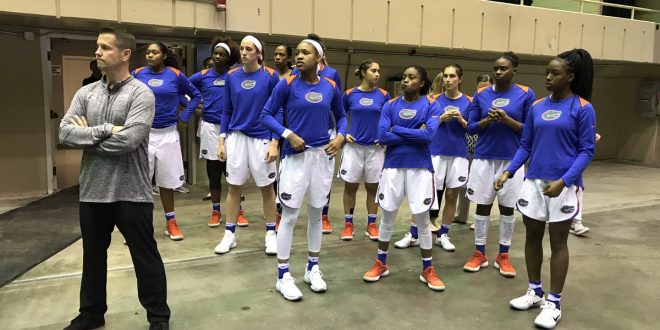 During the Thanksgiving holiday, the Florida Gator women’s basketball team was in Savannah, Georgia to take part in the Savannah Invittaional. The Gators were tasked with playing three games in three days. They were also trying to improve in several key areas that caused them to struggle mightly in their loss to Florida State. The Gators are returning to Gainesville winning two out of three games in Savannah.

Throughout the season, the three-point shot has come and gone for the Gators. After a horrendous offensive showing against the rival Seminoles, the Gators came out guns blazing in Savannah. In Tuesday’s 87-80 win over Richmond, the Gators went 15-30 (50%) from beyond the arc. The 15 made three-pointers was a program record. This record didn’t last long. The Gators weren’t the best Thanksgiving guests as they dominated the hometown Savannah State Tigers 90-40. The win was fueled by the Gators breaking their own record by knocking down 17 three-pointers. The Gator offense was rolling and had a lead as high as 58 in the fourth quarter.

The Gators didn’t come out of Savannah in one piece. Junior guard Funda Nakkasoglu suffered an ankle sprain late in the fourth quarter of the Gators’ win over Richomond. Nakkasoglu sat out the Gator matchup with Stetson. With Nakkasoglu out, the Gators were without their main ballhandler. This and playing with nine available players on a rare back-to-back caused the Gators to suffer an 85-71 upset loss to Stetson. Fortunately, the Gators were able to overcome Nakkasoglu absence in Thursday’s win over Savannah State. Nakkasoglu is wearing a boot on her left leg and her status moving forward is unclear.

The Gators setting the most three pointers made in a game record twice wasn’t the only piece of history achieved in Savannah. In Thursday’s blowout win over Savannah State, sophomore guard Delicia Washington posted a triple double of 12 points, 10 rebounds, and 10 assists. Washington’s triple double was the third in program history and the first since Vanessa Hayden’s against Kent State in 2001. Filling in for the injured Nakkasoglu, sophomore guard Sydney Searcy had a career performance on Thanksgiving. Searcy led the team with 20 points, shooting 7-13 from the field and 6-12 from three.

The Gators look to build on this successful trip to Savannah as they return to Gainesville. They return to the court on Tuesday as they host Jacksonville.

Previous No. 7 Florida Takes Down No. 17 Gonzaga, 111-105, In 2OT Thriller
Next No. 3 Gator Volleyball Finishes Regular Season in Missouri