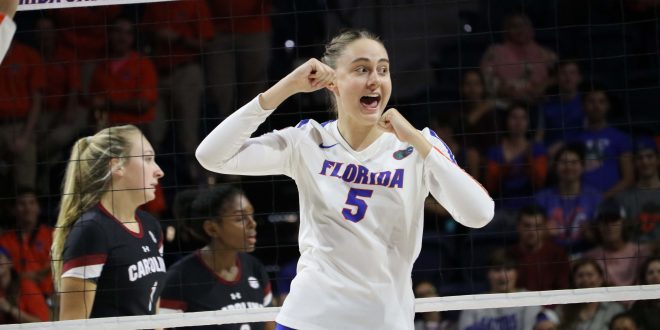 The Gator volleyball team will play its final regular season match on Saturday. The game will be in Columbia and the match has a lot of implications for seeding in the NCAA Tournament. The Gators right now are in contention for the #1 seed.

Also, if the Gators beat the Tigers, they would clinch a share of their 23rd Southeastern Conference championship with Kentucky.

The Gators beat Missouri in four sets earlier in November. While most saw the box scored and assumed that it was an easy game for Florida, Mizzou was able to expose some holes in their defense. Having five players record seven or more kills in the match, the strong Florida defense struggled early with the Tiger’s relentless power.

Senior outside hitter Melanie Crow had 10 kills and seven digs. She was all over the place and will be a significant factor in Saturday’s match.

Missouri also had sound defense on Florida’s spikes. Four players had over 10 digs each including redshirt senior Kiara Larson and freshman Dariana Hollingswort combining for 30. Florida will have to remain patient and find holes in the stiff Missouri defense.

There is a lot to play for and Gator coach Mary Wise hopes her team will be ready for the road to end the regular season.

Florida will look to win their 11th in a row as they make their 27th consecutive berth into the NCAA Tournament. Play from offensive leaders Rhamat Alhassan and Carli Snyder will be critical for this game and the postseason. Both struggled against the Tigers last time they played.

It was Shainah Joseph who shined to beat Missouri. With a career-high 20 kills, the Tigers could not adjust to the running spikes Joseph consistently put on the line. Florida will hopefully have a similar performance from her again.