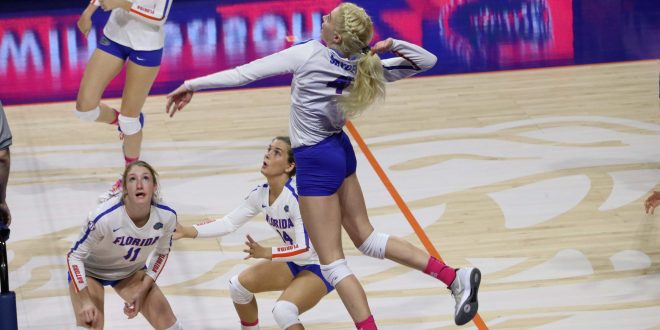 Saturday afternoon was a historic one for the Gator volleyball program as Florida clinched its 23rd SEC title and Mary Wise won her 900th game as a head coach as the Gators beat Missouri on the road 3-1.

The Gators were led by senior Shainah Joseph who had a team-high 19 kills. Rhamat Alhassan led the team with eight total blocks.

UF stumbled out of the gates with a 25-23 first set loss but were able to win the next three. Unlike most this season, Missouri was able to keep up with the Gators in terms of blocks. Both teams finished the match with 11.

Allie Monserez led the team in assists with a team-leading 49. Caroline Knop helped tame the Tigers attack with her team-high 17 digs.

Florida volleyball winning its 23rd SEC title has the program in the upper echelon of collegiate sports achievement.  Florida’s 23 titles are the 10th most in the SEC across all sports. Florida has the fourth most league titles in any sport since volleyball was introduced in 1979.

What may be more impressive than all of the SEC titles is the consistent success the Gators have had under coach Wise.  With their 27-1 regular season record, Florida has had 25 or more wins in 27 consecutive seasons. That is the longest active streak by 11 years.

No more fitting way for @GatorMary to hit this milestone!

Saturday afternoon was another chapter in Mary Wise’s Hall of Fame career. With the win, Wise is the third female coach to have 900 victories. She is the all-time leader in wins in Division I volleyball history.

By winning the SEC title, the Gators get an automatic bid into the NCAA Tournament. Florida will find out its seed and whether or not it will be a host on Sunday at 9 p.m. The seeds will be announced during a special selection show on ESPNU.

The first round of the NCAA Tournament begins on Thursday.