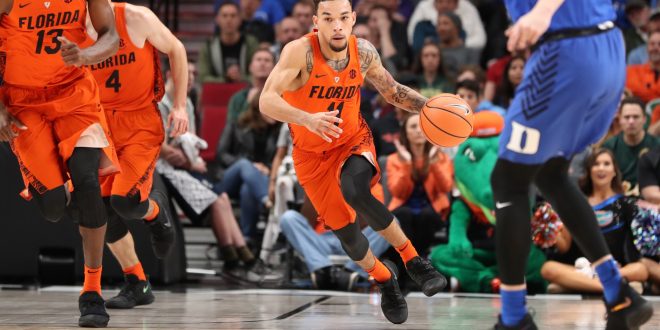 The Florida Gators had no answer for the Duke Blue Devils’ offense late down the stretch. Duke ended the game on a 30-10 run, winning the contest 87-84. Diaper dandy Marvin Bagley III continued to shine as he recorded the sixth double-double of his eight game career, posting 30 points and 15 rebounds.

Jalen Hudson finished the game with the first double-double of his Florida career, notching 24 points and 10 boards. The Blue Devils secured half a share of the PK80 Tournament championship at the Moda Center in Portland on Sunday night/Monday morning despite leading the game for only 4 minutes and 36 seconds. The Gators failed to score a single point during the last 2 minutes and 38 seconds of the game.

Duke made 10 of their 23 three-point attempts, outshooting Florida from beyond the arc, 43%-40%. Chris Chiozza contributed 13 points, 7 assists, 6 rebounds and 2 steals. KeVaughn Allen scored 15 of his 17 total points in the first half, missing 7 of 8 shots in the final twenty minutes. The Blue Devils held the clear interior advantage, outrebounding the Gators 43-36.

College basketball hasn't seen a freshman produce like Marvin Bagley III in a long time. Another 30 and 15 as Duke comes back to beat Florida in PK80 title game.

The Gators opened up the game two for three from beyond the arc, jumping to a 12-4 lead with 15:57 remaining in the first half. Jalen Hudson scored five of Florida’s first 10 points.

A 10-0 run quickly ensued giving the Gators an 18-4 lead with 14:46 left in the first frame. Florida hit 7 of their first 12 shots, knocking down three of four attempts from beyond the arc.

Marvin Bagley III helped fuel a 9-3 run, diminishing Florida’s lead to 9 with 11:04 remaining in the first twenty minutes. The freshman grabbed 5 of Duke’s first 12 boards, with three of them coming on the offensive end.

At the under-8 minute media timeout Florida led 32-24. The Gators only turned the ball over once in the first 12 minutes and 15 seconds of play. Marvin Bagley continued to tear apart Florida’s interior defense, scoring 13 of Duke’s first 22 points.

The Blue Devils turned their play up a notch late in the first half, completing a 12-3 run to bring them within two points of the Gators. Florida led 33-31 with 6:20 remaining in the first frame.

Florida stormed back, taking a 48-46 lead with 1:10 remaining in the first half. Chris Chiozza hit a three-pointer in the face of 6’11” Marvin Bagley III during the stretch.

The Gators ended the half on a 16-5 run, taking a 53-49 lead into the locker room. Marvin Bagley led all players with 18 points and 8 rebounds in the first twenty minutes. KeVaughn Allen scored 15 points in the first half, sinking three of five three-pointers.

As expected Duke’s inside advantage kept them in the game early when Florida’s offense was surging. The Blue Devils outrebounded the Gators, 20-19, in the first half and outscored UF in the paint, 20-16. Florida hit 7 of 13 three-pointers in the first frame, while Duke sunk 8 of 17 attempts.

Chris Chiozza led the Gators in first half PER (20), posting 11 points, 6 assists and 3 rebounds. Florida averaged 1.359 points per possession in the first frame, while Duke charted 1.225.

The Gators jumped to a 10-point lead after an 8-2 run to start the final twenty minutes of play. Florida led 61-51 at the first media timeout with 15:48 left to go.

Jalen Hudson’s long two-pointer with a little more than 13 minutes left in the game gave the Gators a 68-57 lead with 12:56 remaining, their largest of the contest up to that point. Hudson scored 10 of Florida’s first 15 points to start the second half.

The Gators extended their lead to 15 with 11:13 left in the contest. An 11-0 run in which Florida hit four of five shots contributed to the scoring barrage. Duke missed 8 of their first 11 shots to start the second half.

With 8:51 left in the game, Jalen Hudson grabbed an offensive rebound and followed it up with a contested lay-up. The sequence gave Hudson the first double-double of his short Gator career. Florida led 76-66 with 7:50 remaining in the contest.

Egor Koulechov had a chance to tie the game as time ran out, but couldn’t get a good look at the rim. The Blue Devils won the game 87-84, sweeping their portion of the Motion bracket of the PK80 Tournament.

The Gators will have 7 days off before taking on the Florida State Seminoles at home on Monday, December 4 at 9 p.m.

Gators a legitimate Final Four contender. Really good. So fun to watch. Talented, well-coached. But gotta get Egbunu back. Defending athletic big guys will be a problem until. Williams from Gonzaga had 39. Bagley just went for 30. That’s a lot of points.