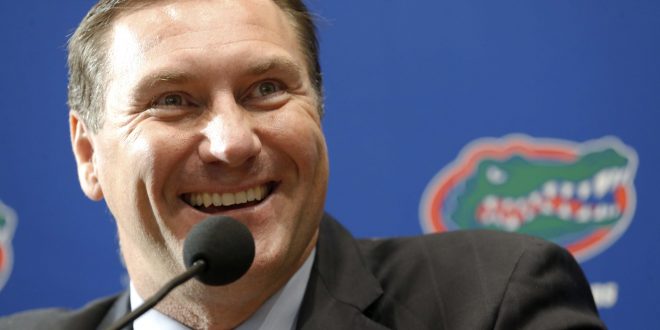 Mullen has already announced two of their replacements – Billy Gonzales and John Hevesy, two long-time assistants of his.

Out With the Old

There’s no question the Gators were in dire need of some fresh faces on the coaching staff after this past season. And that’s exactly what Mullen is doing just one day after becoming the head coach.

Two of the most notable names that will no longer be on the staff are Shannon and Nussmeier.

After taking over as the interim head coach, Shannon went 1-3, with his only win against an obviously inferior UAB team. Shannon previously served as associate head coach, co-defensive coordinator, and linebackers coach from 2015-2016 and was promoted to defensive coordinator in January under Jim McElwain. Shannon’s defense in 2016 ranked fifth nationally in total defense, but this year’s defense faced more problems.

Gator fans will no longer have to question Nussmeier’s play calling either. Coming off a season featuring an offense that struggled to get first downs and score, the coaching change will be a chance to hit the reset button and hopefully develop a more dynamic offense.

In With the New

Mullen has announced Billy Gonzales and John Hevesy will take on assistant coaching roles for the team. Both Gonzales and Hevesy will be following Mullen from Mississippi State, but they have a longer history than that. Each of the new assistant coaches has spent at least ten seasons coaching with Mullen, including during his time spent at Florida.

Most recently, Gonzales was the co-offensive coordinator/passing game and wide receivers coach for Mississippi State, where he has been since 2013. During his time there, MSU recorded 18 100-yard receiving games and the three highest team single-season receiving yard totals.

Gonzales brings with him 25 years of college coaching experience, including the 14 seasons he spent with Mullen.

Hevesy is coming off his role as co-offensive coordinator/running game and offensive line coach for the Bulldogs. He helped oversee an offense that had the third-best rushing attack in the SEC and an offensive line that gave up the least amount of sacks in the conference this past season. Since the 2013 season, five of Hevesy’s protégés have reached the NFL.

Both Gonzales and Hevesy were on the Florida staff when the team won the National Championship in 2006 and 2008. Gonzales also won a title game at LSU in 2011.