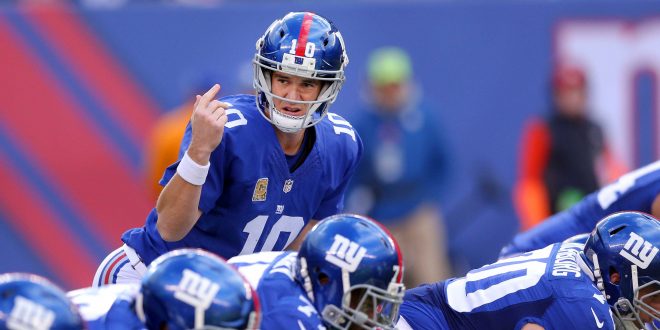 In a surprise move, quarterback Eli Manning has been benched for the New York Giants upcoming game against the Oakland Raiders.

Manning has started every Giants game since November 21st, 2004. In addition to his 210 start streak, he has led the giants to two Super Bowl wins in 2008 and then again in 2012, being named MVP on both occasions.

The New York Giants have a current record of 2-9 with their only wins against the Denver Broncos and the Kansas City Chiefs. The Giants also have an astounding 19 players on injured reserve.

Manning has been a very good sport in regards to this decision.

“Coach McAdoo told me I could continue to start while Geno and Davis are given an opportunity to play,” Manning said. “My feeling is that if you are going to play the other guys, play them. Starting just to keep the streak going and knowing you won’t finish the game and have a chance to win it is pointless to me, and it tarnishes the streak. Like I always have, I will be ready to play if and when I am needed. I will help Geno and Davis prepare to play as well as they possibly can.”

Geno Smith will be replacing Manning in Sunday’s game. Smith joined the Giants after four years with the Jets. His career statistics are 501 completions on 866 pass attempts, 5,962 yards, 28 total touchdowns and 36 interceptions. Smith has a career passer rating of 72.4.

Although Manning is supportive of Smith, this decision truly hits a soft spot in the face of the franchise. He appeared hurt when asked about being benched. When asked how hard it is hitting him emotionally he says “It’s hard- It’s been a hard day to handle this. I’m gonna hang in there and figure it out.”

Fans are extremely disappointed in head coach Ben McAdoo, general manager Jerry Reese, and especially owner John Mara. It is also assumed that McAdoo made the drastic decision to bench Manning in an attempt to save his job after the Giants losing season. Reese and McAdoo shared their comments on the decision

“This is not a statement about anything other than we are 2-9, and we have to do what is best for the organization moving forward, and that means evaluating every position,” general manager Jerry Reese said. “I told Eli this morning that an organization could not ask for any more in a franchise quarterback. He has been that and more. Nobody knows what the future holds, but right now, this is what we think is best for the franchise” (Giants.com)

“This is not the way it should be, but unfortunately, it’s where we are,” McAdoo said. “Our number one priority every week is to go win a game, but we owe it to the organization to get an evaluation of everybody on the roster, and that includes at the quarterback position. I’ll say it again, I have the utmost respect for Eli and everything he has done for this organization throughout his career. He is the consummate professional. He doesn’t like the position we are in, and neither do any of us. Eli has had to deal with a lot this season. Through it all, he has done everything we have asked of him in getting that unit ready to play. He has been steady, just like he has always been.” (Giants.com)

Reactions to the Benching

All you hear is how classy the NYG organization is and then they pull a move like this. Eli Manning helped win them two Super Bowls. It’s not like they’re playing for something this year. Let the man finish the season out and then do what you have to do. Show some respect

The result of the decision to bench Manning will play out on Sunday when the Giants take on the Raiders.