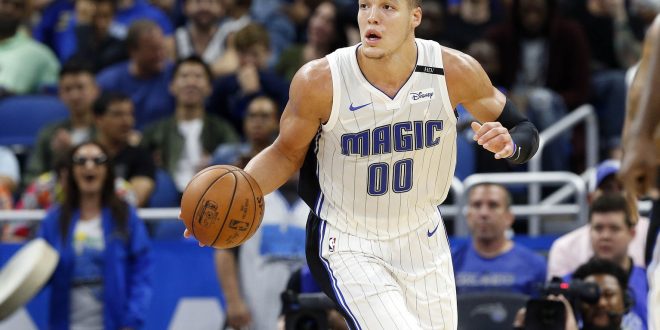 Florida’s local NBA teams went one for two in last nights NBA action.  The Orlando Magic defeated Billy Donovan’s Thunder 121-108 in the Amway center. The Miami Heat did not fair as well in their matchup last night, falling 115-86 on the road against the New York Knicks.

The Orlando Magic picked up a much needed win last night over the Oklahoma City Thunder.  The Magic started the season off hot, even leading the Eastern Conference for a short period of time.  They have cooled off considerably, falling in their previous nine straight before their win last night.

The leader of last night’s Magic win was Aaron Gordon. The Magic star, known across the league for his dunking ability, was unstoppable last night en route to a 40-point game. Gordon also added 15 rebounds, four assists, and four steals to his stat line. Gordon played a team high 44 minutes going 13-23 from the floor 6-12 from three and added eight more points from the free throw line.

The game was tightly contested throughout until the Magic opened up in the fourth quarter. The highlight of the game came in the first quarter when Magic guard Elfrid Payton dropped NBA Star Russell Westbrook on a nasty crossover.

Now that the Magic’s nine game cold streak is over, they need to focus on getting back into the playoff picture. The Magic currently sit at 9-13 on the year, 2.5 games out of the playoff bracket in the Eastern Conference.

The Magic will be in action again tomorrow night as they welcome the Golden State Warriors.

The Miami Heat could not get anything going offensively last night against the New York Knicks. Without their star player Hassan Whiteside, who sat this game out due to knee soreness, the Heat lacked a go-to scorer and it showed. The Heat collectively only shot 32-84 from the floor, a mere 38%.

The absence of Whiteside also showed up on the defensive side of the ball as they allowed the Knicks to shoot over 60% from the floor.

For the Knicks, they were able to dominate the Heat in all aspects of the game even without their star Kristaps Porzingis. Porzingis left the game after just three minutes of action with an ankle injury.

Kristaps Porzingis had to be helped to the locker room after suffering an ankle injury. #Knicks pic.twitter.com/SA1HJQbm3G

The Heat are also sitting right outside of the playoff race with a 10-11 record so far on the year. They sit exactly one game out of the top eight in the Eastern Conference. The Heat’s next game will be at home against the Charlotte Hornets tomorrow night.