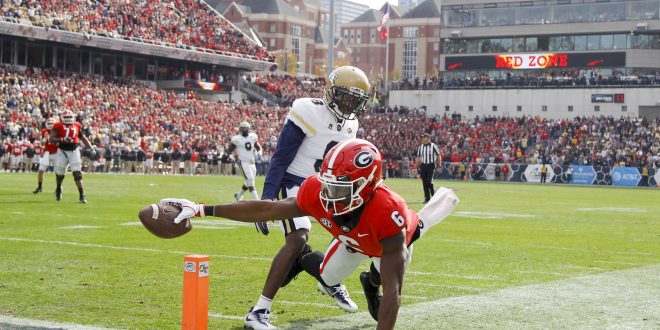 The College Football Playoff is on the line this weekend and it begins with the SEC Championship game between No. 4 Auburn and No. 6 Georgia. The first time around, Auburn destroyed Georgia 40-17 on November 11 when the two teams met. For the Bulldogs, it’s the biggest do-over they’ll get all season after taking a nasty loss to Tigers three weeks ago. But for the Tigers, it’s an opportunity to balance out taking two losses this season and be the first team to break the two-loss barrier for a spot in the playoffs.

What it takes to win: Auburn

If Auburn can repeat a lot of what it did the last time they faced Georgia, they’ll have a high chance of pulling out another ‘W’.  Defensively, they’ve been tremendous. The Tigers haven’t allowed more than one touchdown run in a game since the loss to Clemson in Week 2.

Alabama was the first team to be able to establish any kind of run against Auburn – the first to average more than five yards per carry and hit the 200-yard mark.

With the run being the cornerstone of UGA’s offense, it will be pivotal to lock that down again. The Dawgs lead the SEC in rushing but weren’t able to exert any of that dominance against Auburn. The Tigers kept it contained, only allowing them 46 total yards on 32 carries. Meanwhile Auburn’s Kerryon Johnson put up 167 of the team’s 237 total yards.

That might be a different story this time around with Johnson being banged up a bit. The tailback has and injured shoulder, and according to head coach Gus Malzahn earlier this week in the media conference, Johnson is “day-to-day” right now.

If they decide to rely more on the ball being in the air, they’re in good hands with quarterback Jarrett Stidham. He’s hitting close to 70 percent of his passes this season and has kept his interceptions to a mere four all year. The Tigers will need to control the line of scrimmage to give Stidham enough time to see the field.

Malzahn knows that they’ll have to hold off all the talent Georgia has one more time in order to keep their playoff hopes alive.

One immediate advantage the Dawgs will have going into this game is that it’s hard to beat a team twice – especially in such a short range of time.

Georgia head coach Kirby Smart recognizes what his own team didn’t do when they faced Auburn the last time but also clearly see that the Tigers are on a roll that will be tough to stop. A large part of this is Johnson, the centerpiece of the Tigers’ offense. Keeping him out of the game will be key, which may be a simpler task than before due to injury.

Georgia’s own run game will have to step up to its usual standards for the Bulldogs to find any success this time around. Nick Chubb and Sony Michel establishing their dominance early will be pivotal, plus, it’ll relieve quarterback Jake Fromm from some of the pressure.

Fromm has proven he’s able to handle taking on more and more game responsibility. Although, the battle up front is what caused him to feel it the most in the match up earlier this season – he was sacked four times.

What may have stuck out most aside from the lack of a run game was the multiple mistakes the Bulldogs made that put the Tigers in good position time after time. They set up Auburn for a touchdown after a roughing the punter penalty and then fumbling a punt return.

When and where to watch

You can tune in for the much-anticipated rematch this season between Auburn and Georgia this Saturday, Dec. 2nd on CBS at 4:00 p.m. ET.