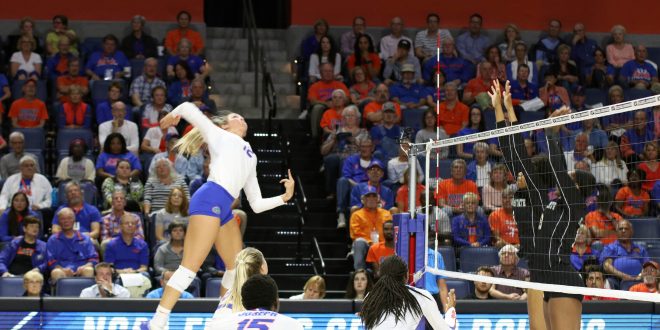 Florida Faces Off Against Miami in Second Round

Florida won in three sets last night against a scrappy Alabama State team. While no one player was dominant, everyone contributed in some way. Carli Snyder and Paige Hammons both had 3 services aces each that were key in the win. Florida will look to find more advantages in small areas.

This Miami Hurricane team that is 22-5 on the season and very physical on the pins. Florida will look to remain solid on the blocks while also taking advantage of their height for strong kills.

Another advantage they will look to utilize will be the strong supporting fanbase at the O’Connell Center. The players were definitely motivated by their home crowd and are hoping for a similar turnout tonight. Carli Snyder spoke last night about how not just the fans are helping, but the strong support from the coaching staff as well. With all of this, Florida feels they can redeem themselves from last year.

Miami has lots of offensive firepower as they displayed last night against the College of Charleston. Senior Outside Hitter Olga Strantzali is a major factor on offense as she has a team-leading 479 kills. Florida will be looking to contain her and using her weaknesses to their benefit. Strantzali holds just a .277 hitting percentage and can be erratic in her shots. The strong Gator defense will be put to the test.

Four teams advanced to the 2nd round as the #NCAAVB tournament opened up tonight! pic.twitter.com/NzpvYGsqpr

Strantzali, like a lot of other players on the Hurricanes, is strong defensively as well as offensively. On the back line, she has a high effort and digs out a lot of opposing spikes. Strantzali averages 9.26 digs a game and is a force for Miami.

Another player to watch out for will be Elizaveta Lukianova. The 6’6 Redshirt Freshman has been dominant from the outside recently hitting .356% in her last six games. This may be because of her much higher volume of shots in the second half of the season.

Mary Wise said while this isn’t a revenge tour, it is a time for learning from mistakes.