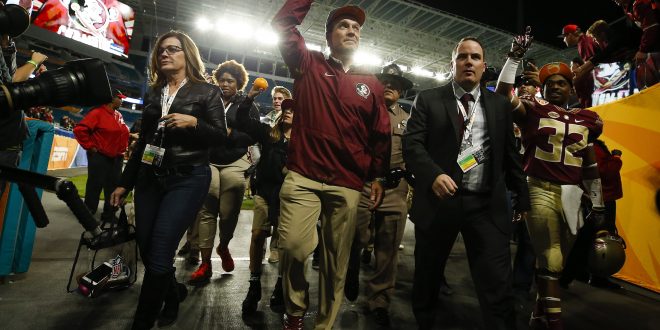 Texas A&M is After Jimbo Fisher

The Jimbo Fisher rumors of going to Texas A&M are still swirling and picking up heat. In the midst of all the coaching changes this year, it’s rumored one of the most successful coaches in college football might be parting ways with his school; after seven years and one National Championship (in 2013). This comes after Texas A&M decided to fire Kevin Sumlin earlier this week. The Aggies currently have a 7-5 record, while the Seminoles have a 5-6 record.

Well Money talks, and the Aggies are reportedly willing to offer Fisher over 7 million yearly. Plus, the school has also invested a lot of money in its facilities, and currently have the best in the SEC. Thursday, Texas A&M held a board of regents meeting, to discuss their plan for hiring their next head coach. Chancellor John Sharp said, the school should soon be scheduling another meeting to approve a hire. Reportedly, the Florida State Official’s are wanting Fisher to decide soon, for recruiting sake.

Jimbo Fisher holds a weekly radio show where he lets fans ask questions. The questions are preapproved before they ask Fisher. However, one fan had the guts to fake his question and ask what all the fans wanted to ask, “Where is the loyalty?.” He then was rushed out of the building. Fisher did not respond.

If Fisher is leaving, Saturday’s game against Louisiana-Monroe could be his last game as a Seminole. FSU had to reschedule the game, after Hurricane Irma forced them to cancel it earlier this season. FSU will be playing at 12 pm Saturday as they try to become bowl eligible for an NCAA record 36th consecutive seasons.

Follow me on Twitter @SarahCarlieUF or Instagram @sarahcarlie
@SarahCarlieUF
Previous Florida Faces Off Against Miami in Second Round
Next Rocky Top Rebuild: From The Ground Up