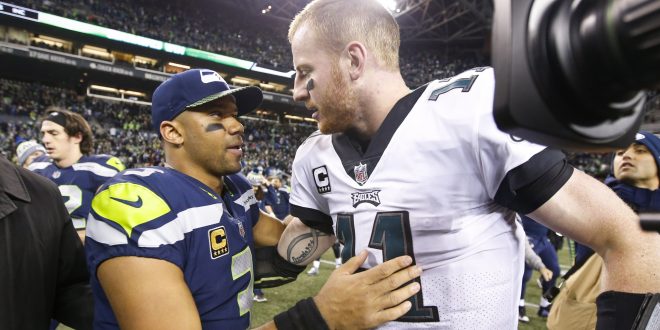 With the NFL season three quarters of the way done, teams are making final surges as the post-season gets closer.

There were many predicted victories with a few unexpected wins. Let’s take a look around the league

Coming into Week 13 the Eagles were on a roll. Having won nine straight, they were favored against Seattle.

However, the Seahawks had something else in mind.

The Seahawks have been an after thought for most NFL fans. After dealing with injuries and a schedule that hasn’t allowed for much momentum, they came out strong against Philadelphia.

After coming out with a 10-0 lead in the first, Seattle was then later able to prevent the Eagles from making a come back, winning 24-10.

Russell Wilson dominated the quarterback battle. Throwing for 227 yards, 20 completions, and three touchdowns, he proved that he could go up against the perceived MVP Carson Wentz and win.

Wilson couldn’t have been happier with his team’s performance.

Wentz, on the other hand, had a rougher outing. While he did throw for 348 yards and a touchdown, he fumbled the ball on the goal line and threw an interception.

The turnovers are what decided the game according to Wentz.

The Eagles will try and get back on track against the Rams on Sunday while the Seahawks will travel to Jacksonville in search of a win to climb the NFC West standings.

With a 31-21 victory over the Carolina Panthers, the Saints retained sole possession of first place in the NFC South.

The Saints were happy to bounce back after the Los Angeles Rams broke their eight game winning streak last week.

When talking with the media, Brees noted that the team is always looking forward.

For the first time since 2003, the Los Angeles Rams have clinched a winning season.

The 32-16 victory moved the Rams to 9-3 on the season and has helped keep a solid grip on first place in the NFC West.

Early mistakes by Arizona quarterback Blaine Gabber allowed L.A to jump out to an early 16-0 lead. However, the Cardinals fought back. Eventually cutting the lead to only three points during the second quarter.

But the Rams’ offense proved to be too much. Quarterback Jared Goff threw for 220 yards and went 21 for 31.

Star running back Todd Gurley contributed by carrying the ball 19 times for 74 yards and also 84 yards off of six receptions.

Minnesota Vikings move up to the top spot

By holding the Atlanta Falcons to field goals, the Minnesota Vikings won their eighth straight game.

The 14-9 victory moved the Vikings up to the top spot in the NFC. The team also holds the best record in the league along with the Eagles and Patriots.

Quarterback Case Keenum completed 83 percent of his passes, throwing for 227 yards and was responsible for the Vikings’ two touchdowns.

Minnesota will look to add to their streak next Sunday against the Carolina Panthers.