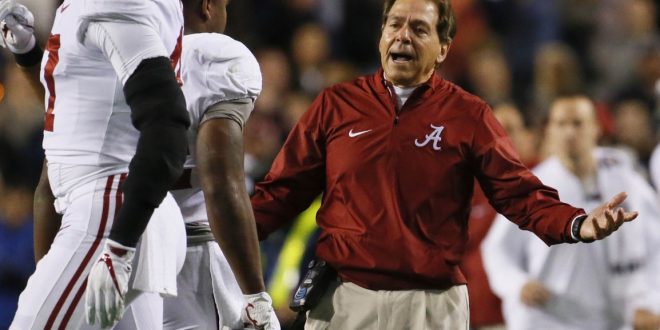 Nick Saban’s crimson tide are ready for another rematch of Dabo Swinney’s Tigers. Yet again the college football playoff will feature a matchup between the two. Both games have gone down in the annals of College football and this game promises nothing less. Much debate broke out when Alabama was seeded at number 4 and Big 10 conference champion Ohio State was left out. Alabama was unable to win the SEC West division, but the committee reasoned they were still one of the best teams in college football.

Alabama was ranked No. 1 in the country for the majority of the season and the College Football Playoff committee recognized that. Ohio State and Urban Meyer beat undefeated Wisconsin to take the Big 10 Championship. However, the 31-point loss the Buckeyes suffered at the hands of the Iowa Hawkeyes was too large of a blemish to overlook. The committee has shown that they choose the 4 best teams in the country within reason

If Wisconsin would have beaten Ohio State in the Big 10 championship they would have most likely have made it over Alabama. It is harder to select Alabama. Especially as a one loss team that didn’t win the SEC let alone the SEC West. However, If the undefeated Wisconsin Badgers beat Ohio State it would have been too impressive of a resume to deny.

The offenses for Alabama and Clemson aren’t as flashy as they have been the last few years. Part of it has to do with the departure of Clemson’s best QB in school history Deshaun Watson. The defenses are both top 10 in the country respectively. Whoever can get the biggest push for their guys up front will have the largest advantage. Alabama looks to bounce back from the shocking loss at Jordan-Hare. They will have a lot to overcome, however they enter the game as 1.5 point favorites.