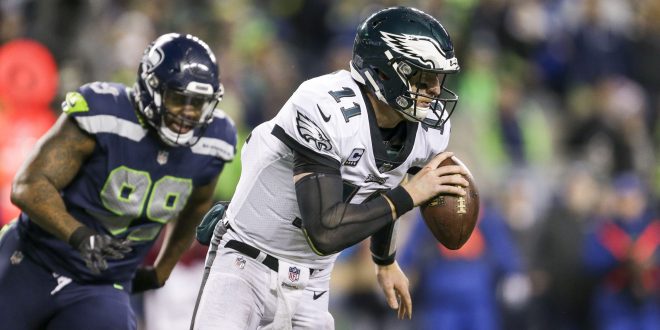 With a final three weeks in the NFL season, teams are making their final moves to try to punch their ticket to the playoffs. The NFC has two teams with a win this week can clinch their spot in the playoffs. Though, Week 14 boasts some tough conference match-ups that lays in their wake and could shape the playoff picture.

The Philadelphia Eagles will look to bounce back after losing last Sunday against the Seattle Seahawks.  Currently tied with the Minnesota Vikings for the best record in the NFC, this game has high stakes in the home-field advantage race for the Eagles. However, what may be most intriguing is the match-up between Jared Goff and Carson Wentz, the top two quarterbacks selected in the 2016 draft. With a win, the Eagles will clinch their division. The Eagles have won four straight in the series.

The Minnesota Vikings is on an eight game win streak and looks to make it nine against the Carolina Panthers. Both teams have stated that their primary focus this week on each other and not the standings. It should be an interesting game with playoff picture implications as a win would help the Panthers with their division standings and a win for the Vikings would put them into the playoffs.

The Seattle Seahawks have a big out of conference game against the Jacksonville Jaguars. Seahawks Quarterback Russell Wilson has made waves in the league for his play even being talked about in MVP discussion. However, he will be facing the league’s top defense. This could very well be the game he needs to staple himself as the front runner for the award. Both teams will be looking for a big win aiding them to a spot in the playoffs.

This week is going to be huge in shaping the playoff picture with the capability of teams clinching their spot or making a better case for themselves. With games like these, it makes this Sunday very intriguing.