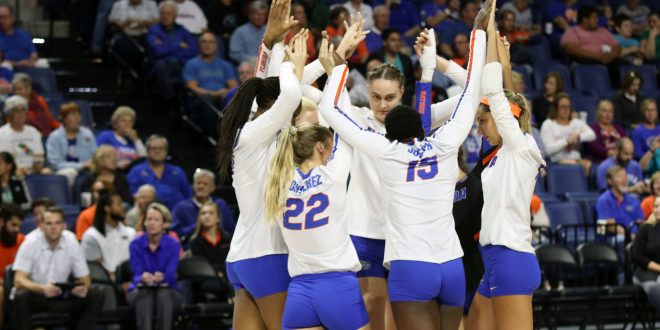 As students at the University of Florida crammed for finals on their Saturday afternoon, they may have taken a break and tuned in to see their volleyball team play. If they tuned into the wrong time, they could have seen a team at the end of their season desperately holding for dear life. If they were patient, they would have seen something special.

What they would have seen was a team unlike any other. A team that does not give up no matter how much they are down near the end of the game.  Down to visiting USC two games to one, Florida rallied to come back to win a five set thriller to advance to the program’s eighth Final Four appearance.

A team with prominent personalities is usually not a successful one. It is full of players who demand the ball and make those around them worse. Most coaches have a hard time controlling their team especially if it has a bunch of weapons which are demanding the ball. That is what makes Florida coach Mary Wise so great. She has somehow convinced a bunch of world-class athletes to play as one.

She spoke after the emotional game about how she is so proud of them. How they do everything so well and know their role to maximize the team’s potential.

A team that helps each other wins together. That was shown tonight against USC.

For three sets, USC held star outside hitter Carli Snyder to just two kills. USC keyed on Snyder early and had middle blocker Jordan Dunn shadow her for most of the match. Snyder was frustrated for most of the game. With their best offensive weapon gone, Florida adjusted early on and fed their middle hitters. Rhamat Alhassan and Rachael Kramer took advantage of their openings and registered 25 kills between the two of them.

However, their production did not last forever. USC let up just a little on Snyder to focus on the other weapons, and they paid for it. Seven kills in the fourth set including a clutch ace to bring them to the set point; Snyder was back in the game.

.@carli_snyder with a MASSIVE SMASH to tie it, and the O'Dome is louder than ever!

Florida made vital adjustments when they needed to. They saw early that USC prioritized her and reacted accordingly. Snyder remained patient and waited for her opportunity to strike, and she did.

USC’s  head coach said after the game that while Snyder did eventually explode as expected, he felt his team did all they could and “held her down to a small roar.” Unfortunately, a small roar was all it took.

Shainah Joseph today is a star on the court, plain and simple. It’s hard to imagine Shainah Joseph ever to be overlooked. Standing at 6’1″ with her vicious spikes and stone cold blocks, it seems near impossible. No one would believe the journey she has been on to get to this point.

Joseph, as every freshman does, came to the University of Florida expecting big things from herself. Dreams of being the hero and getting the final kill to go to the Final Four.

As time went on, the dream began to look more and more distant as she watched others play ahead of her for four years. Finally, after being patient and not complaining, she was given her shot. She made the best of it.

In the blink of an eye, it’s the Elite Eight in her final year at UF. After being down and out more times than they can count, the Gators turn to someone they know they can trust, someone who has been there.

With the O’Connell Center quite literally shaking, Shainah Joseph was still as stone. With the match point and a perfect set from Allie Monserez, she blasted it down to the floor to take the Gators to the Final Four.

Joseph only has moments to realize what she’s accomplished before being mobbed by her team in front of the net. All the work and the patience that led her to this perfect moment. At any point, she could have quit, or she could have transferred. She could have said that this sport wasn’t for her, but she didn’t. She stayed the course and remained determined, much like her team did in the last two sets against USC.

Coach Wise expressed her gratitude toward Joseph for staying the course because they would not be where they are today without her. It’s not over; Joseph’s chapter in history, much like the 2017 Gator volleyball team, is still being written.