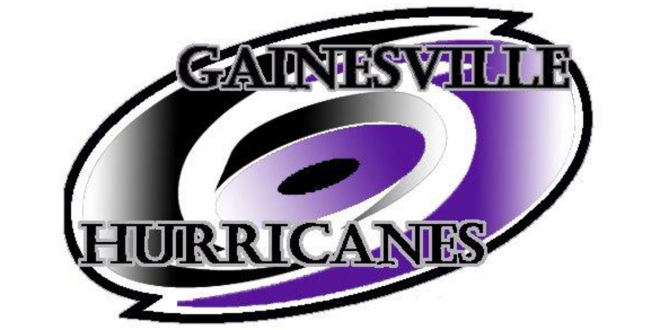 FEATURE: A Coach and His QB

An SEC champion, three-time All-SEC honors and a 14-year NFL career. It’s easy to say that Shane Matthews knows how to be a quarterback. With his playing days behind him, Matthews is using his knowledge to guide his son Luke and the Gainesville Purple Hurricanes’ offense.

Luke, GHS’s starting quarterback, said his father has been coaching him since he was 5 years old. Shane said he has served as a volunteer coach for all of Luke’s teams. Shane currently serves as Gainesville’s offensive coordinator.

Shane isn’t new to coaching at the high school level, here are his previous coaching jobs:

According to MaxPreps.com, Luke threw for under 1,500 yards and 12 touchdowns to nine interceptions in his sophomore season in 2016. It was his first year starting for the Purple Hurricanes and Shane’s first year running the offense.

Gainesville averaged 339 yards of offense and over 30 points per game in the tandem’s second year together. Luke threw for 2,391 yards and 25 touchdowns with only six interceptions. Those numbers are much-improved from the year before.

Interview with Shane and Luke

I sat down with the father-son duo to discuss their relationship as player and coach along with how they balance that dynamic on and off the football field. The duo reminisced about their best and worst games both statistically and personally during the interview.

Shane cites Luke’s performance against Forest High School in Ocala as his best game statistically. But, their worst game together was when they played South Lake High School where Luke struggled with calling the proper offensive line protections against South Lake’s defense.

Despite that, the Hurricanes blew out South Lake 49-10 on Oct. 26. He threw for four touchdowns that game.

Shane gives some insight into how he coaches Luke compared to Gainesville’s other offensive players. They discuss the benefits of having a father and son work together as an offensive coordinator and quarterback. Luke gives his thoughts on knowing the experience his father has playing the quarterback position.

The two give a little bit of a preview of Gainesville’s 2018 season and their mindset for it. Luke goes into detail about whom he tries to emulate in terms of play style and what he plans to do after his high school career is over.

The Head Man Weighs In

Mark Latsko, Gainesville’s head coach, echoed how beneficial it is to have someone like Shane on his staff. His players may have never seen Shane play, but that does not mean they think Shane has no credibility as a coach.

Sometimes, Latsko has to step in as the head coach during practice when Shane and Luke get after one another. But, Latsko cites the competitive nature of both Luke and Shane as the reason for the tandem having moments where the situation gets heated.

Latkso said him staying even-keel helps balance out Shane’s up-and-down nature during a football game. He said the two only ever butt heads when it comes to determining what offensive play calls will work during a game.

He said that Shane likes to call his plays by feeling whereas Latkso prefers to be a little more scripted in his play-calling especially when it comes to the first eight to 10 plays of a football game. Sometimes, Latsko will have to keep Shane from dwelling on plays, getting too emotional in the press box or straying away from a positive attitude.

Latkso said his QB and OC are not the only father-son pairing on his football team. But, they are the only one where the father coaches his son’s position. Terry Lee coaches Gainesville’s wide receivers while his son Jawan plays defensive back.

Gainesville’s team this year went 8-3 and finished second in the district. The Purple Hurricanes’s season ended in the first round of the state playoffs after a 34-14 loss in a rematch with Vanguard High School (Ocala).

Latkso’s outlook for the 2018 season possessed a similar kind of confidence that Shane and Luke had.

With Luke’s senior year on the horizon and confidence from both Shane and Latsko, the 2018 Gainesville High School Purple Hurricanes football team will be a fun one to watch.