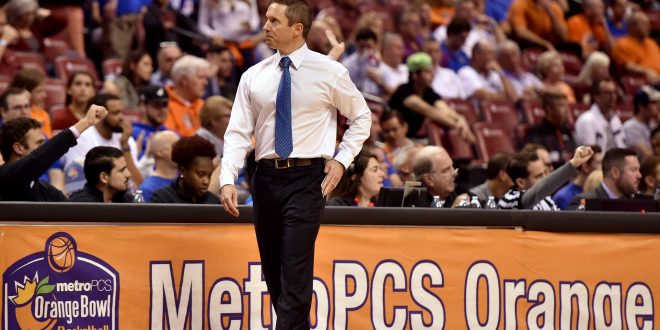 The Clemson Tigers ended Saturday evening’s Orange Bowl Classic on a 14-3 run, winning the game 71-69. The loss marked the Florida Gators’ first defeat in the Orange Bowl Classic since the 2009-2010 season. UF made one shot in the final 5 minutes and 39 seconds of play.

Jalen Hudson led all players with 23 points, knocking down four of eight shots from beyond the arc. Unfortunately for the Gators, he went 3 for 11 from the field in the second half. Marcquise Reed paced the Tigers with 22 points, adding 6 assists and 5 rebounds.

Florida’s poor shooting at the charity stripe may have ultimately cost them the game. The Gators went 9-17 at the free throw line and missed four of six second half free throw attempts. Clemson shot 55.6% from the field in the final frame.

A slow start saw the first basket of the game come almost three minutes into the contest. Donte Grantham’s dunk started the scoring giving Clemson a 2-0 lead. Jalen Hudson scored Florida’s first five points to take back the lead, 5-4, with 15:28 remaining in the first half.

Jalen Hudson started off hot, sinking four of his first five shots from the field. He scored Florida’s first 12 points of the game. The Gators led 12-11 with 10:50 left in the first frame.

Through the first 14 minutes of the game, only KeVaughn Allen and Jalen Hudson had scored for the Gators. Hudson paced Florida with 14 points, while Allen added 8 points. The Gators led 22-18 with 6:22 left in the first half.

Egor Koulechov ended the first twenty minutes with a buzzer-beater, fadeaway three-pointer to give the Gators a 40-33 lead at the half. Florida made four of their final five three-pointers to end the first half, shooting a combined 7-13 from beyond the arc in the first frame. Despite the scoring outburst, the Gators recorded only four assists on 13 made shots.

Jalen Hudson led all scorers with 14 points in the first half, while KeVaughn Allen added 11. Chris Chiozza and Jalen Hudson led Florida in plus/minus, each scoring a +7. Florida outrebounded Clemson, 18-15, but was outscored in the paint, 16-10.

The Gators opened up the second half on a 7-2 run, taking a 49-39 lead with 15:46 remaining in the contest. Chris Chiozza scored 6 of Florida’s first 9 second-half points.

A 12-2 run brought Clemson back within one point of the Gators with just under 14 minutes left in the game. 10 of those 12 points came off of free throws.

Florida stormed back with a 12-6 run of their own, taking a 9-point lead with 5 minutes left in the contest. A loud “orange…blue” chant was started midway through the run at the BB&T Center.

A 12-2 Clemson run, combined with over four minutes of scoreless basketball for the Gators, gave the Tigers a 67-66 lead with 1:44 remaining in the contest. A Gabe DeVoe three-pointer gave Clemson the lead.

Previous FEATURE: A Coach and His QB
Next Gator Volleyball Falls Short of First National Championship