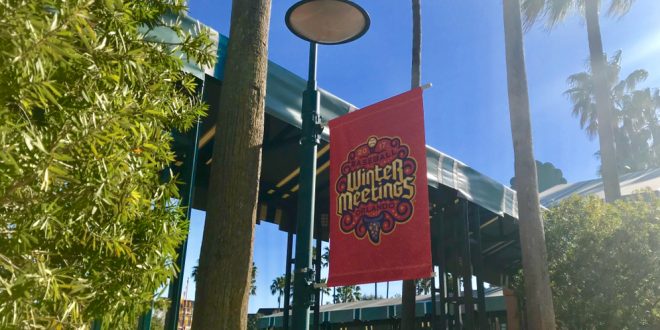 The Major League Baseball Winter Meetings, the sport’s biggest week of the off season, has come to a close. The meetings took place at the Walt Disney World Swan and Dolphin Resort in Orlando.  There were multiple trades and signings over the course of the Winter Meetings, with some of the moves being big ones.

One of the biggest and most talked about events of the whole week was when the reigning National League MVP and Miami Marlins outfielder, Giancarlo Stanton, was traded to the New York Yankees. For a while, there had been rumors the Marlins wanted to trade Stanton due to his big salary. Their new chief executive officer/part owner, Derek Jeter, happens to be the newly retired shortstop of the New York Yankees. So, it seems the Marlins co-owner’s ties to the Yankees organization might have played a part in the trade. In return, the Marlins obtained second baseman Starlin Castro, pitcher Jorge Guzman and shortstop prospect Jose Devers.

With Giancarlo Stanton and Aaron Judge being two of the best power hitters in baseball on one team; it’s going to be absolutely amazing to see how next season plays out and just how many home-runs the pair will rack-up.

However, the Marlins apparently felt like they hadn’t created enough media frenzy this week; they went ahead and traded outfielder Marcell Ozuna to the St. Louis Cardinals on Thursday. This was a great find for the Cardinals, since it’s been reported that they were one of the teams interested in getting Stanton, before his trade. The Marlins received pitchers Daniel Castano, Sandy Alcantara and Zac Gallen along with outfielder Magneuris Sierra in the deal. The President of Baseball operations for the Marlins, Michael Hill, reminisced on watching Ozuna come into the player he is today.

Throughout the week the Rays received infielder Joey Wendle from the Oakland A’s for a player to be named. Tampa also got San Diego Padres third baseman Ryan Schimpf in return for SS Deion Tansel. And with future consideration, the Rays traded lefty pitcher Anthony Misiewicz to the Seattle Mariners.

We ran into an old pal at the Winter Meetings!

Hear what Carlos Peña had to say about a player's point of view at this time of the year. #RaysUp pic.twitter.com/MDFC2u0Ckx

The Braves kind of kept it quiet, most of the week that is, until the Rule 5 Draft. The Braves ended up drafting Anyelo Gomez a right handed pitcher from the Scranton/Wilkes-Barre Rail Riders.

Yes, of course the Stanton trade happen, but there were other big name trades as well that were traded or released.

The Yankees made a trade for San Diego outfielder Jabari Blash; in return the Padres got third baseman Chase Headley and pitcher Bryan Mitchell.

The Cardinals ended up trading outfielder Stephen Piscotty to the Oakland A’s for Yairo Munoz and Max Schrock. It has been reported that the Cardinals made the trade with Oakland to help Piscotty be closer to his mother who, earlier in the year, was diagnosed with amyotrophic lateral sclerosis.

On Thursday, they had the Rule 5 Draft. And in case you don’t know, the Rule 5 draft is where teams that have room on their 40-man rosters are able to draft off other teams farm systems. If a player signs at age 18, within five seasons they must be put on the team’s 40-man roster or they are eligible for the draft. And for players who signed when they were 19+ they must be brought up to a 40-man roster within four years. To draft a player, teams must pay $100,000 and the player must stay on the team’s 25-man roster for a full season or be offered back to their former team for $50,000.

For a full list of the draft, select here.

Follow me on Twitter @SarahCarlieUF or Instagram @sarahcarlie
@SarahCarlieUF
Previous No. 22 Florida Set To Take On Clemson On Saturday in the Orange Bowl Classic
Next FEATURE: A Coach and His QB