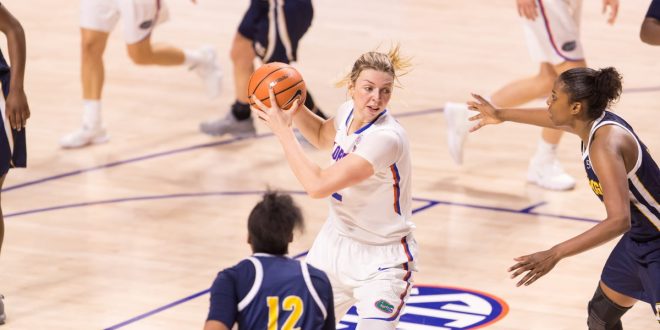 Coming into the game with Chattanooga, the numbers didn’t favor the Gators in establishing a consistent three-point shot as Chattanooga came in shutting down opponents from beyond the arc. The Gators became the Mocs’ latest victim Wednesday afternoon. Florida shot an abysmal 4 of 28 (14.3%) from the three-point line.

Only sophomore guard Delicia Washington and junior guard Funda Nakkasoglu made three-pointers on the afternoon, each hitting two. The Mocs’ zone defense prevented from Florida from getting any looks from the top of the key. The Gators had some looks from the corners, thanks to good passing but those shots didn’t fall.

She was 4-17 shooting before THIS! pic.twitter.com/SpWHMZ1kpX

Down 55-48 with about eight minutes remaining, Florida fought back and tied it at 55 with a Dee Anderson layup and one with 4:37 left. After some back and forth, the Gators took the lead with less than a minute to go when Delicia Washington knocked down a huge three-pointer. A layup from Mocs center Arianne Whitaker gave Chattanooga the lead 61-60 with 24 seconds left.

The Gators looked to Anderson for the corner three to take the lead but the shot didn’t go down.  Then Florida was forced to foul three times just to get the Mocs in the bonus, taking valuable seconds off the clock. Florida still had a chance down 63-60 with 5.1 seconds left. Paulina Herlser took the final shot for Florida, a three from the corner. She did get hit on the shot, but there was no call.

The Gator backcourt had to take on more minutes Wednesday afternoon. Sophomore guard Sydney Searcy didn’t play against Chattanooga. Searcy is in concussion protocol and most likely won’t be able to go against St. Joseph’s Thursday.

In her absence, sophomore guard Elif Portakal and freshman guard Tameria Johnson had increased roles off the bench. The timetable for Searcy to return to the court is uncertain. One would imagine that the training staff will not rush Searcy back on the floor, given Sydney Morang’s situation earlier in the season with concussions.

A loss like the one the Gators experienced Wednesday afternoon is tough to come back from and it could be more challenging due to the short turnaround the team has before their next game. Florida will return to the court Thursday in their second game of the Gator Holiday Classic. They’ll take on St. Joseph’s with tip-off at noon. St. Joesph’s, like Florida, lost their first game of the tournament, falling to Princeton 63-54.

Previous FEATURE: From JUCO to Florida, Mark Thompson Has Persevered
Next Florida Bounces Back With Win over JMU