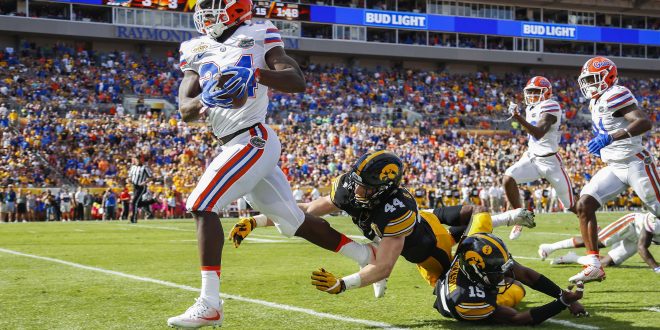 FEATURE: From JUCO to Florida, Mark Thompson Has Persevered

Looking back on his two years at Florida, Mark Thompson‘s career did not go as planned.

Before ever stepping foot on the field, he declared that he would run for a thousand yards before the team’s bye week.

Mark Thompson just 794 short yards away from rushing for 1,000 before the Georgia game.

He ended his career rushing for only 596 yards and two touchdowns in two years.

Thompson was not a top recruit coming out of high school. He started out at Nassau Community College but transferred out before ever suiting up for a game. The next stop was Dodge City Community College in Kansas.

At Dodge City, Thompson emerged as one of the best running backs in community college. In his two years there, he became the team’s all-time rushing touchdown leader.

In his redshirt sophomore season, he had 268 carries for 1,298 yards and 18 touchdowns. He rushed for over 100 yards in six of the team’s games and had four multi-touchdown games, including two games of four touchdowns.

Thompson became a top-ranked JUCO recruit and had many major D1 offers. He decided to accept a scholarship offer and enroll at Florida.

During his career at UF, he was never the primary back. In his first year, he split reps with Jordan Scarlett and Lamical Perine, and this year split carries with freshman Malik Davis and Perine, and then Adarius Lemons after Davis was hurt.

With Jordan Scarlett suspended, Thompson took on more of a leadership role and helped teammates Davis and Lemons to adjust to college football.

Thompson finished off his college career very strong as he finally started to show the fans what they had been hearing about for two years. He is a very big back, standing at 6’2 and weighing a bruising 239 pounds. For a big running back, he showed a surprisingly quick burst through the line of scrimmage. His hard running allowed him to break many tackles and was hard to bring him down with only one defender.

His redshirt senior season started off slow. In the team’s first eight games, he had 33 carries for 121 yards, an average of 3.7 yards per carry. In that period, he had two games where he did not even get a single touch.

Even when things weren’t going well, he never put the blame on other teammates, especially when the offensive line was getting criticized early in the season.

When Randy Shannon took over as the interim head coach, he said Thompson would have to perform better.

“It’s time for Mark Thompson to step up,” Shannon said. “He’s a senior. He’s a guy that’s 6-2, 240, runs 4.4. It’s his opportunity to come in and play. We’ve got to challenge him on offense to make sure there was a reason why he was recruited to be a part of Florida and that’s for him to be a skilled running back like he is but also be productive and be a physical-type guy that can get open in space and make plays.”

When Thompson got his chance, he made the most of that opportunity.

In his last three games at UF, he totaled 25 carries for 176 yards, averaging over a tremendous seven yards per carry. He also scored two of his three touchdowns of the year in the same span.

His path has never been easy, and he feels as if he is prepared for anything at the next level.

“It’s been a long ride,” he said. “That’s really how I could sum it up. Good times, bad times, ups and downs, but at the end of the day, I made it to the finish line.”