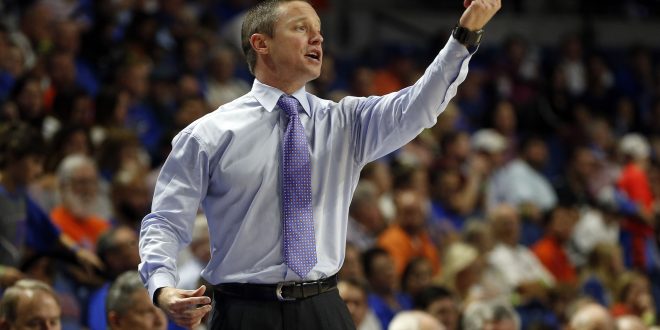 Florida Set To Open SEC Schedule Against Vanderbilt on Saturday

After a bumpy non-conference schedule in which the Gators had their highs with wins over No. 20 Gonzaga and No. 21 Cincinnati, and lows with losses to Loyola-Chicago and Florida State, the time has come for SEC play. Florida opens up their conference slate at home on Saturday vs. the Vanderbilt Commodores at 4 p.m. on ESPN2.

Vandy has been the Gators’ kryptonite since Mike White took over as head coach. The ‘Dores are 5-0 in the last two seasons against UF and are the only school that Mike White hasn’t beaten in the SEC. Last year, Vanderbilt went 3-0 against Florida, beating them twice in the regular season and then later in the SEC Tournament.

Hard to believe this was @Chiozza11's first collegiate dunk. Let's watch it over and over! #GoGators@GatorsMBK pic.twitter.com/SKFMH1PKzk

The Kings Of Quality Losses

Vanderbilt’s 5-7 record is marked with losses to No. 3 Arizona State, No. 9 Virginia, No. 23 Seton Hall, USC, Kansas State and Middle Tennessee State. While seven losses are the most of any SEC team thus far, the average KenPom rating of those 6 defeats is 31.2. For a frame of reference, the Gators are ranked 36th on KenPom.

Despite these quality losses, you need to win games against good teams to have any shot at making the tournament. Vanderbilt’s best wins this season have come against UNC-Asheville and Radford, neither of which are ranked in the Top 140 on KenPom.

Live and Die By The Three

Last season, the Commodores were one of the best three-point shooting teams in the nation. They shot 37.6% from beyond the arc, which ranked 61st in the NCAA. Riley LaChance had the 12th-highest three-point percentage in all of college basketball and the ‘Dores had four players who shot above 37% from long-range.

This season, Vandy has been abysmal from downtown, sinking only 31.9% of their attempts. While LaChance’s shooting percentage has only dropped down about 4% from last season, he’s one of only two eligible players on Vanderbilt to make at least 37% of their three-pointers this season. The Commodores most common lineup in the past five games of Saben Lee, Riley LaChance, Matthew Fisher-Davis, Joe Toye and Jeff Roberson, who as a group have earned 26.1% of the total minutes in that time period, are shooting a combined 25.9% from beyond the arc.

Despite the team’s low three-point percentage, Vanderbilt still ranks 31st in the NCAA in three-point attempts per field goal attempts.

Jeff Roberson, Matthew Fisher-Davis and Riley LaChance have scored 52% of Vanderbilt’s total points this season. Roberson leads the pack, averaging 14.4 points per game on 41.7% shooting from beyond the arc. While Fisher-Davis is second on the team in scoring, notching 12 points per game, he’s been overall inefficient from the field.  MFD is knocking down shots at a below-average 36.3% clip this season and is shooting 21.4% against ranked teams.  Fisher-Davis, the team’s leading scorer from a year ago, needs to pick up his play if the ‘Dores want to re-enter the NCAA Tournament conversation.

If there’s one thing the Gators could use right now it’s consistency. On any given night, Florida can shoot anywhere from 15%-50% from beyond the arc. Without John Egbunu and Isaiah Stokes, the Gators have begun to live and die by the three. In their past three contests, Florida has averaged 30.3 three-point attempts per game, sinking only 31.9% of those shots. During that stretch, KeVaughn Allen, Egor Koulechov and Jalen Hudson are a combined 18-61 (29.5%) from beyond the arc.

The Gators’ half-court offense is very reliant on high pick-and-rolls. Chris Chiozza is one of the best pick-and-roll point guards in the country, but his ability to play-make off of those screens has been limited due to Florida’s offensively inept frontcourt. The defense has no incentive to tightly guard the rolling big man, which in turn leads to Chiozza, or whoever is playing point guard, getting trapped at the top of the key with not much room to maneuver. Until the Gators get back John Egbunu, their most reliable low-post scorer, Florida will more than likely continue to struggle in the half court.

John Egbunu and Isaiah Stokes are still projected to come back in late January. If we consider late January to be January 20th or later, that would mean Egbunu and Stokes would miss the Gators’ games vs. Vanderbilt, No. 5 Texas A&M, Missouri, Mississippi State, Ole Miss and Arkansas with a possible return date on January 20th @ Kentucky. Once again, this is all speculation as no official return date has been set for either big man.

Chase Johnson has also been held out of practice as he is back in concussion protocol. Johnson has missed time this season due to illness and a concussion. Along with Stokes, Egbunu and Johnson, Jalen Hudson is a game-time decision. Hudson has been dealing with a virus for the past couple of days, per UAA.

Saturday’s game tips-off at 4 p.m. and can be seen on ESPN2. Rich Hollenberg and the always great Dick Vitale have the call. You can also listen to the game on the Gator IMG Sports Network with Mick Hubert and Bill Koss.