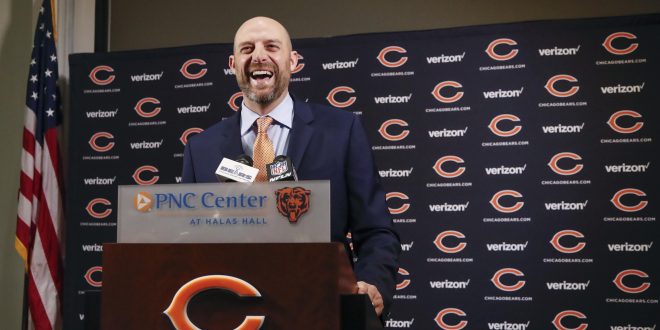 The Bears met with Nagy on Sunday, one day after the Chiefs blew a 21-3 lead to the Tennessee Titans in the wild-card round. And the Bears’ weeklong search came to an end. In a recent press conference, General Manager of the Chicago Bears, Ryan Pace, said Nagy is a good match.

According to the Chicago Sun-Times, Pace said, “It starts with his leadership qualities. He’s a very natural leader. You’re talking about going from one side of the ball to the whole team. From the research and the interview, I felt very comfortable with him in front of the whole team, and that goes back to his quarterback days.”

Matt Nagy and the Chiefs

Matt Nagy has been with the Kansas City Chiefs for the last five seasons. Nagy was hired as the quarterbacks coach in January 2013. He served under head coach Andy Reid, whom he previously worked under as the quality coach for the Philadelphia Eagles in March 2011.

“The Bears hope to retain defensive coordinator Vic Fangio on Nagy’s staff,” according to the Chicago Tribune. “But no decision on that has been finalized.”

Ryan Pace welcomes Nagy as the leader of 53 men and not just a Trubisky whisperer. “This is about more than the quarterback,’’ Pace said. “But don’t be fooled. Nagy, who will call plays, was hired to make Trubisky the best he can be.” Nagy said it himself, he isn’t just there for Trubisky.

Kate Venezio is a fourth-year telecommunication-news student at the University of Florida. Kate does it all: Behind the camera she captures emotional moments as a photographer for the University of Florida Athletic Association. She's comfortable being in front of the camera, too. Kate interviews players, coaches, fans and family members for pre- and post-game coverage as a beat reporter for ESPN Gainesville/WRUF-FM. In addition, Kate produces the sports segment for the weekly WUFT News program. There, she's responsible for writing the script in its entirety to include production commands. The presentation includes video highlights and interviews taped and edited, and Kate then live anchors the final package on a daily deadline. In addition, she writes stories for wruf.com where she informs sports fans of local, state, and national trending topics. Kate also utilizes social media as a tool to help get the stories in front of viewers.
@@kate_venezio
Previous Raiders Hire Jon Gruden
Next Can Georgia Get Back to The College Football Playoffs?