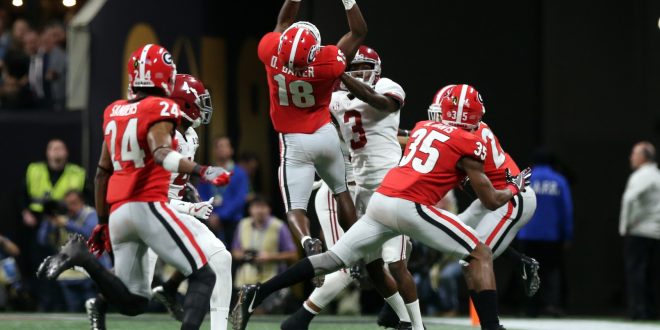 Can Georgia Get Back to The College Football Playoffs?

The Georgia Bulldogs lost the National Championship on Monday to Alabama when Tua Tagovailoa hit De’Vonta Smith in the end zone.

Georgia had a Cinderella season going 12-1 in the regular season.  Their only loss was to Auburn.

Now, with the 2017 season is over, Georgia is looking to make it back to the national championship game to bring home the first championship since 1980.

Coach Smart: “This is a special, special group. These seniors… you gave so much to this program, every one of you seniors. You did it the right way. These seniors set a standard around here that you young players better understand, because now the standard is here.”#GoDawgs pic.twitter.com/Sp7WqJWRsu

The Bulldogs’ have many returners but key players are not coming back:

With these losses, Georgia has big holes to fill.  Head coach Kirby Smart plans on doing that with his no. 1 ranked recruiting class.

Out of the 23 recruits for the 2018 season, six are five stars, 12 are four stars and five are three stars.

Nine recruits are already enrolled for the Spring 2018 semester.

Players who are both staying at Georgia or graduating are talking with recruits to tell them about the success the team is having now and will continue to have in the future.

This interaction keeps the recruits interested and also will show them what they can do for the team.

For the players who are returning, they are all using this championship loss as motivation going into the off-season.

Smart was Saban’s defensive coordinator from 2006-2015 and even played pick-up basketball together.

As a result, Smart runs his team close to how his mentor over in Tuscaloosa, Alabama runs his program.

According to 24/7 Sports, the two coaches wanted to see the same movie, at the exact same time, at the same movie theater the Sunday before the championship game.

The similar coaching styles showed at the game when Georgia was winning for the first three quarters and when Alabama overcame being down 13-0 in the third quarter.

Georgia’s loss will not hurt Smart.  Instead, it will make him a better coach which will help his teams in the future perform to their full potential.

The Bulldogs have to fill some now empty holes, but the team is out for blood.  They did not want the 2017 season to end like this.

Georgia is being built as an SEC East powerhouse.  As long as the players work hard for their success and as long as Kirby Smart is coaching, Georgia will continue to dominate college football.

Nicolette is a senior at the University of Florida who has participated and enjoys reporting on all things related to sports.
Previous Chicago Bears Hire Matt Nagy as Head Coach
Next Way Too Early Prediction for Alabama 2018