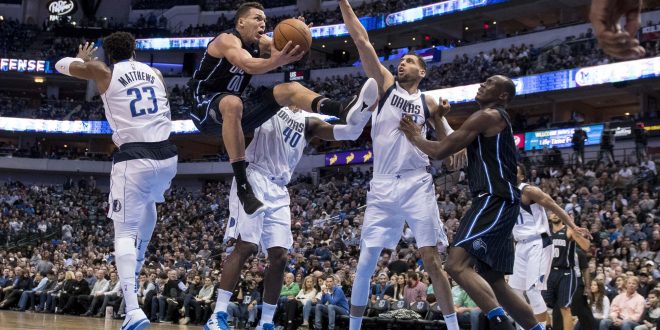 The calendar has turned the corner to a new year, and the Orlando Magic haven’t yet won in 2018. After dropping a 114-99 decision to the Dallas Mavericks on Tuesday night, the Magic have lost five straight games, including four this month, and nine of their last 10.

Orlando started the regular season off winning six of its first eight games, but a rough stretch in November and December, including a pair of nine-game losing streaks, has dropped the team to 12-29 and second-to-last in the Eastern Conference. Following a 131-127 loss to the Cleveland Cavaliers on Saturday, the Magic looked to bounce back and pick up a win against the Mavericks.

After keeping the score close most of the night, the Magic let the game slip away later in the fourth quarter. Orlando started the second quarter on a 13-2 run and led 48-43 at halftime behind guard Mario Hezonja‘s team-high nine points. But, the Mavericks answered back at the start of the third quarter, going on a 14-3 run. That put Dallas up 57-51, and it never looked back. The Mavericks led the rest of the game and outscored the Magic 71-51 in the second half.

Mario Hezonja scores a team-high 9 PTS to help give the @OrlandoMagic a 48-43 lead over the @dallasmavs at the half!

Despite pulling within four points late in the fourth, following an Aaron Gordon 20-foot jump shot, the Magic were outscored 14-3 down the stretch and allowed triple digits in a loss for the 26th time this season. Forward Dirk Nowitzki, who scored a season-high-tying 20 points, and rookie point guard Dennis Smith, Jr., who tallied 20 points, 15 of which were in the second half, led the Mavericks. Nowitzki went 7-for-7 from the free throw line and is now tied for sixth all-time in that category.

Dirk Nowitzki scores a season high 20 PTS to lead the @Dallasmavs past the @OrlandoMagic 114-99!

With Gordon on the bench to start the game because of a team violation, the Magic had to rely on other scorers during most of the first quarter. Gordon eventually entered the game, though, and scored 19 points off the bench. He also scored in double figures for a team-best 32nd time this year. Gordon was one of five Orlando players to score in double digits in the loss, including point guard D.J. Augustin, who had 18 points.

Aaron Gordon has scored in double figures for a team-best 32nd time this season.#PureMagic#NBAVote

Late in the third quarter, Gordon fought hard near the rim and collected a rebound, proceeding to make a slam dunk in tight coverage. Orlando was down 78-69 and that brought the score within seven after a back-and-forth third quarter. At the end of the third, Dallas took a 82-75 lead into the fourth.

Both teams will be back in action tonight, and the Mavericks will be on the road against the Charlotte Hornets at 7. The Orlando Magic will look to rebound and avoid a sixth-straight loss against the Milwaukee Bucks at 8.