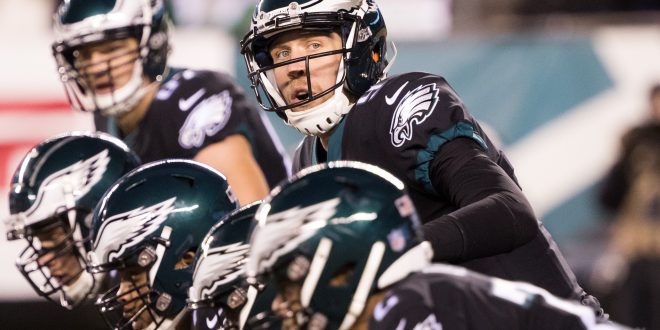 The Philadelphia Eagles have been one of the surprise success stories of the NFL season. After finishing last season with a 7-9 record, the Eagles rebounded with a 13-3 record and home-field advantage in the NFC playoffs.

But it came at a cost

A big reason why the Eagles finished atop the NFC was because starting quarterback Carson Wentz had a breakout year. The second-year quarterback had 3,296 passing yards, 33 touchdowns, and seven interceptions. It should be noted, however, that Carson Wentz didn’t actually get to finish the season, as he tore his ACL December 10 in the game against the Rams. With Wentz, the Eagles scored 31 points per game. Without him playing in the final three regular-season games, the Eagles scored 18 points per game.

A familiar face takes over

Quarterback Nick Foles has taken over the starting job, and he is no stranger to the Eagles. He was with the team from 2012-2014. In 2013, Foles produced one of the best statistical seasons of all time, passing for 27 touchdowns and just two interceptions to go along with a 119.2 passer rating. Foles hasn’t been able to replicate that same magic, throwing for 28 touchdowns and 21 interceptions in four seasons since. After brief stints with the St. Louis Rams and Kansas City Chiefs, Foles returned to the Eagles in 2017. Eagles head coach Doug Pederson said the quarterback has been handling things well.

After sitting out for their bye week, the Eagles will get ready to face the Atlanta Falcons at home. The Falcons are the defending NFC champions and are coming off a strong 26-13 win against the Los Angeles Rams in the NFC Wild Card round. This will be a big test for the Eagles, especially without Wentz. However, with a defense that allowed 18.4 points per game in the season, the Eagles could make this an interesting game.

The Eagles and Falcons will face each other Saturday at 4:35 p.m. in Philadelphia. The game will be broadcast on NBC.