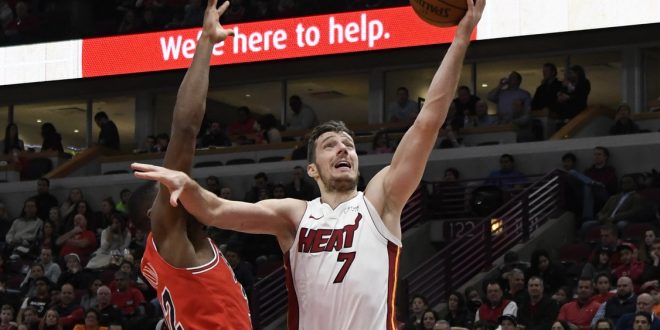 Heat Go Down In Chicago

The Miami Heat concluded a 7-game win streak with an 119-111 loss against the Chicago Bulls on Monday. Before the game, the Heat(25-18) were coming off of a 97-79 win against the Bucks that saw them soar to No. 4 in the Eastern Conference standings. But for most of the first half at United Center, they were behind the Bulls(17-27) by more than 10. Goran Dragić and Kelly Olynyk came through towards the end of the game with 22 points and 14 points respectively to close the gap to within five in the last four minutes but ultimately fell to the offensive efforts of Nikola Mirotic, Zach Lavine and Justin Holiday, who had 25 points (including his career-high of 7 three-pointers.) The Bulls are now pushing forward with a three win streak.

Shooting guard Tyler Johnson went down in the third quarter after colliding with Robin Lopez’s leg. He was on the ground for a couple of minutes before being carted off and diagnosed with a left-ankle sprain. There’s no word of a recovery timetable at this point.

.@MiamiHeat guard Tyler Johnson went down hard after his legs tangled a bit with Robin Lopez's after his layup. #HeatCulture pic.twitter.com/tMT2Z1uiKq

The Heat are no stranger to guard injuries this season. They confirmed on Friday that Dion Waiters will have surgery on his left ankle sprain sustained on Dec. 22. Although surgery has not yet been scheduled, Waiters will miss the rest of the season- a recovery that will cost him the $1.1 million season bonus that was part of the four-year $52 million contract he signed in July. Guard Rodney McGruder likely still has a few weeks until he’s cleared following his leg surgery. For now, Coach Spoelstra has a few replacement options to weigh including Wayne Ellington, Justise Winslow and Derrick Jones Jr.

Despite the upset, Goran Dragić was named Eastern Conference Player of the Week for week 13 by the NBA Monday. Prior to the loss against the Bulls, Dragić led his team to a perfect 3-0 record for week 13, putting up at least 20 points in each game. It’s the second time he earned the title this season and the fourth time in his career.

Goran Dragic named Eastern Conference player of the week. If the Heat keep surging and grab the No. 3 spot by February, does he deserve an All-Star spot?

The Heat look to make a comeback when they take on the Milwaukee Bucks(23-20) Wednesday at the Harris Bradley Center at 8 p.m.